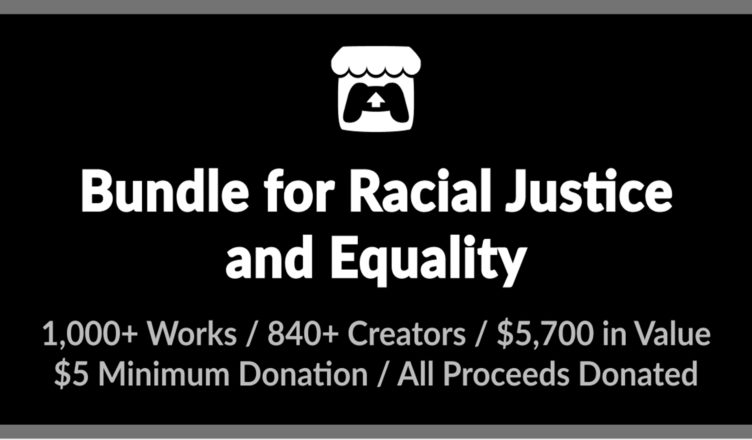 “If you believe in a cause, be willing to stand up for that cause with a million people or by yourself.” – Otis S. Johnson

itch.io is an open marketplace for digital creators with a focus on independent video games. They have recently partnered with creators from across the platform to create a Bundle for Racial Justice and Equality in support of organisations working directly with those affected by discrimination, injustice, and police brutality against black people.

Starting with over 740 projects, the bundle has increased to include 1,659 products donated by over 840 different creators. It can be bought for a minimum price of $5 with all proceeds being split equally and donated to the NAACP Legal Defense and Educational Fund and Community Bail Fund. The bundle has raised nearly $6.5million so far and will hopefully achieve even more before going off sale in less than 2 days!

The Hex is difficult to describe without spoilers; in terms of genre, it’s easier to list those that it doesn’t draw from. Players will experience elements and gameplay from a wide range of styles including, RPG, strategy, platformer, shooter, rogue-like, horror, puzzle as well as obvious homages to more traditional video games such as Street Fighter and Tetris.

Pikuniku is a platformer game by Sectordub, with an interesting mix of a cutesy and dystopian setting. You play as Piko, who only just woke up after a long slumber, to find out that the nearby village is giving up its corn supply to Sunshine Inc. in exchange for “free” money. As you progress through the game, you find the world is not as happy as it seems, with cameras emerging to watch your every move, Sunshine Inc. taking away necessities such as food and housing, and even a rebel movement! The game includes the main adventure mode and a separate cooperative mode!

Escaped Chasm is a short, point-and-click style RPG. It is the first solo project from Undertale artist Temmie Chang and also features music from Toby Fox (creator and composer for Undertale).

The game centres around a lonely, young girl, home alone and unsure where her parents have gone. She spends each day looking for them, awaiting their return before writing in her journal and going to sleep, unconsciously connecting to another world through her dreams as she slumbers.

Nuclear Throne is an ‘action roguelike-like’ with both singleplayer and local multiplayer modes. The game is essentially about mutants fighting for the throne in a post-apocalyptic world made up of 7 main areas spanning deserts, frozen cities and more. The variety of dangerous environments are juxtaposed by the cute, retro-style pixel art and matching UI.

Death and Taxes is a strangely emotive and comedic mix of game genres, including strategy, simulation and visual novel in which players take on the role of a Grim Reaper, deciding who lives and who dies from an office! Choices often involve moral quandary and can affect things such as personal finances, the relationship between Grim and their boss Fate, and eventually determine the salvation or damnation of the entire human race.

Super Hexagon is a brutal arcade game in which you keep a tiny triangle floating ahead of the revolving hexagon from being crushed by the oncoming walls. If you can somehow beat all the game’s six difficulties in one attempt, it will only take you around 6 minutes to complete, but completing Super Hexagon typically takes hours or even whole days.

Wondering about other games included in this bundle? Check out our reviews for:
On Rusty Trails – 2000:1: A Space Felony – Golf Peaks – Thing in Itself