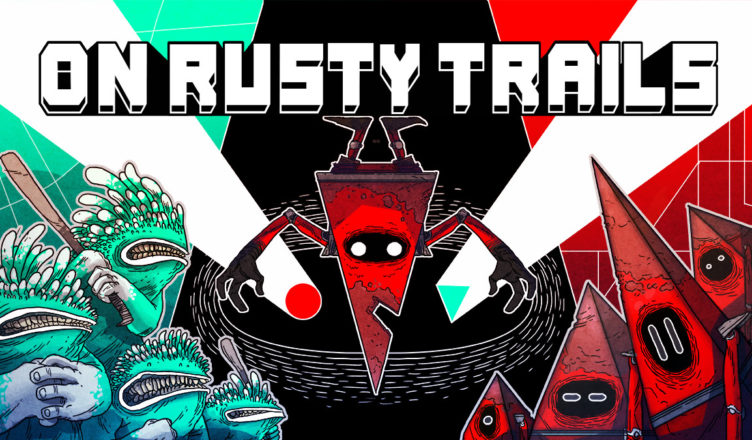 On Rusty Trails is a unique 2D platformer by Black Pants Studio where you play as a metal triangle called Elvis that just got his house destroyed by dangerous green slime! Taking place in a dystopian world where the metal triangles hate the blue hairy creatures, Elvis finds a Shifty Suit allowing him to pretend to be a hairy and blend among them.

Unlike in other platformers, Elvis can stick to any surface he touches and climb walls and even walk on ceilings, but jumps are still affected by gravity. The game makes extensive use of the shifting mechanic, allowing you to traverse as a metal triangle or as a hairy. The levels contain plenty of metal-only and hairy-only blocks, which will retract if you’re not the corresponding creature, as well as mechanics like lasers or rain which you can pass by safely with the correct shift but kill you otherwise.

The levels are short, but they compensate with difficulty. On Rusty Trails loves to throw various mechanics and gimmicks at you, and you will always run into new ones as you play, but the caveat is that the game doesn’t hold back at killing you with them. The game is fair with its difficulty and you can be assured Elvis’s failures stem from your mistakes. It also has a checkpoint system that requires tokens you can collect from the level to use. The game can be completed in 3 hours, which I think is fair if you buy it on sale, but not with its regular $12.99 price tag.

On Rusty Trails uses dark colors and environments to its advantage. The surroundings in the game brilliantly present the tension between the two factions, from the propaganda billboards to the reactions if you approach a crowd of people as the wrong species. The minimal storytelling takes a unique approach that has little to no dialogue but describes what’s on the characters’ minds and illustrating them. The music and sounds also help emphasize the staleness of the air in the world, as well as certain moments, such as the music becoming more frantic when you’re chased by a group of rainy clouds.

On Rusty Trails is a fun platformer with short yet difficult levels that excels in using its shifting mechanic and its dark, dystopian environment. Although I wouldn’t recommend it at full price, it is a great deal when discounted that will provide you three hours of gameplay, and more if you decide to complete each level without dying!

Interested in other dystopian games? Read our reviews of Pikuniku and Orwell!