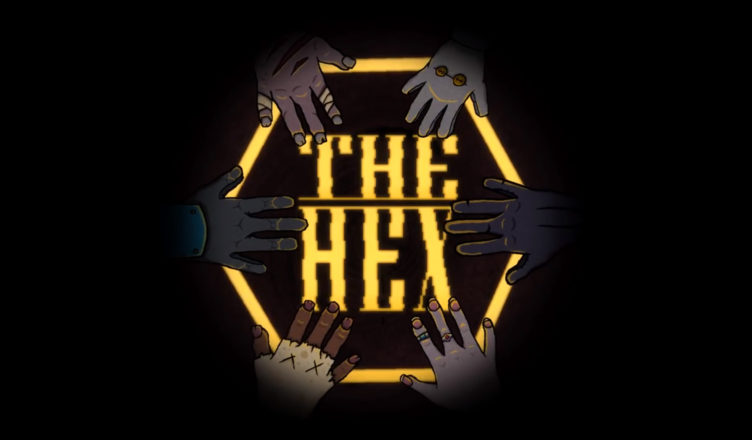 “The secrets of this earth are not for all men to see, but only for those who will seek them.” – Ayn Rand

The Hex is difficult to describe without spoilers; in terms of genre, it’s easier to list those that it doesn’t draw from. Players will experience elements and gameplay from a wide range of styles including, RPG, strategy, platformer, shooter, rogue-like, horror, puzzle as well as obvious homages to more traditional videogames such as Street Fighter and Tetris.

The game starts at The Six Pint Inn and presents itself as a murder mystery, only the crime is yet to be committed. The player controls the bar’s patrons in turn, each with their own distinct game persona and style. For example, the first character played is Super Weasel Kid and the majority of the section largely consists of platformer/runner type gameplay. It is very reminiscent of both Sonic the Hedgehog and Super Mario Bros and even features mushroom enemies to jump on and a flag at the end of each ‘level’.

The Hex has an unusual art-style, largely cartoony but somehow feels a bit twisted and helps add to the unsettled atmosphere. As with the mechanics, the visuals also vary between characters and sections of the game, but the change here is, for the most part, more subtle.

As expected from Daniel Mullins Games, The Hex gets increasingly meta and sometimes confusing as it progresses (you can find a short review of the studio’s previous game Pony Island in our article 5 games for under £5 – Playing on a Pittance). I don’t want to say too much but you can expect dialogue such as ‘there’s a gap in the wall collider‘ and the characters will acknowledge each other as NPCs.

The game’s narrative is highly layered, with the story (stories) taking a range of surprising twists and turns. The obscurity alone provides some replayability, revisiting certain chapters for clarity is tempting. There are also plenty of opportunities to miss things and it definitely has scope for more than one playthrough, particularly on Steam where it has 28 achievements.

The Hex is another enjoyable and unique experience from Daniel Mullins, who has, in my opinion, developed an auteur-esque style with his games (not unlike Davey Wredren, creator of The Stanley Parable and The Beginner’s Guide) and I look forward to seeing what crazy adventure might come next. Overall, the game is an obscure experience, but one I’d highly recommend.

Join our Discord Server if you’d like to discuss spoilers!
Or for more indie game reviews, click here.

One thought on “The Hex: A Very Meta Murder Mystery”