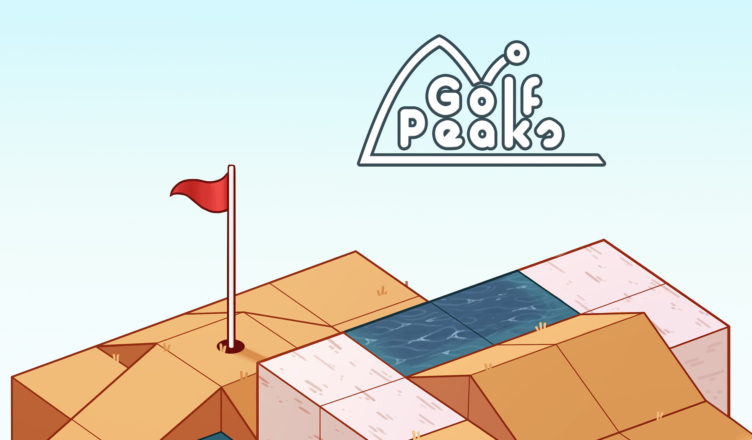 Golf Peaks is a card-based puzzle game by Polish studio Afterburn, in which you play the famed sport in a very unconventional way – you lead the ball to the hole using cards! While the core element of overcoming the terrain is still prevalent, Golf Peaks doesn’t include a scoring system but forces you to use your brain to figure out how to finish the level before you run out of cards.

Playing Golf Peaks is as simple as choosing one of the available movement cards and swiping in the direction you want the ball to go. The numbers on the cards represent how far the ball will go on the square grid, and the arrows show if it will fly up, simply roll, or both. To make the game more interesting obstacles are gradually introduced, such as sand traps, elevated terrain, quicksand pits, water, and even portals. Sometimes you are even forced to waste some of the cards’ movement to succeed, testing your resourcefulness.

The game consists of 120 levels spread across ten worlds, with the first 9 levels required for playing the next world, while the remaining 3 are harder bonus levels. Golf Peaks is just about the right difficulty for a puzzle game, not too easy to finish in one sitting and not too frustrating to play. However, the game expects you to be familiar with all its mechanics, which are shown organically through gameplay.

Golf Peaks has a minimalist art style that looks great on the small screen. The visuals immediately show the player what to expect, and each level is shown in its entirety on the screen, eliminating the need to constantly fiddle with the camera to get a better view of the levels.

The game includes an unintrusive, calm soundtrack that fits the simplistic gameplay, as well as a range of different audio bites for different occasions, such as water splashes or the ball falling off-stage. The visuals, audio, gameplay style, and simple controls make the game perfect on the go. With all that said, it might heat your up phone (as it did with my Huawei Mate 10 lite), so it’s advisable to turn on the game’s battery saver.

Golf Peaks is a great take on the club-and-ball sport and an excellent puzzle adaptation that I would recommend to anyone. The general quality and polish of the levels combined with its price tag mean you will never go wrong with the game.

Interested in other puzzlers? We got you covered! Take a look at RiME and The Pedestrian for PCs and consoles, and Hexcross for mobile phones!