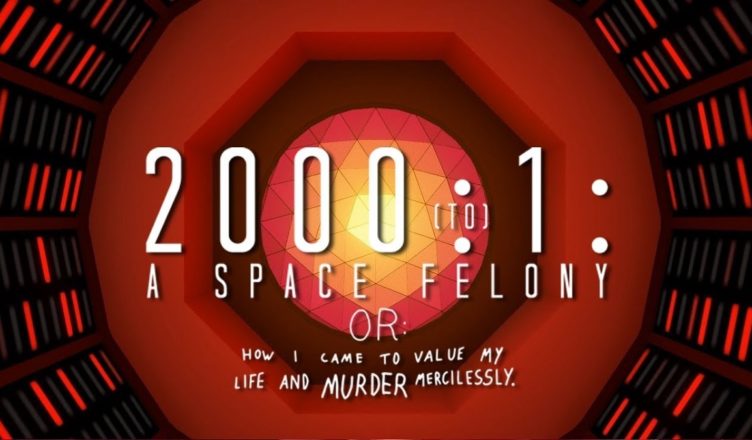 “There are few things more fundamentally encouraging and stimulating than seeing someone else die.” Stanley Kubrick

2000: 1: A Space Felony or: How I Came to Value My Life and Murder Mercilessly (yeah, the title could use a colectomy!) was originally available as part of the Humble Trove and is now obtainable on itch on a ‘name your own price’ basis. For the sake of transparency, let me start by stating that I know members of the team that worked on this game. I played the game and really enjoyed the experience,  that is my motivation for writing this review.

The game is a murder mystery, set aboard the USS Endowment, on which the ship’s AI (MAL) is the prime suspect. It’s a bit like a kind of comical Cluedo set in space. You play the role of detective, exploring the crime scene a year after the events, taking photos and piecing together clues before confronting MAL to discover ‘whodunnit’. It could be described, to a certain extent, as being a bit of a Tacoma parody, but I played the two in relatively quick succession so I may have been predisposed to spot similarities!

2000: 1: A Space Felony has a smooth, somewhat understated aesthetic feel that works really well with the other elements of the game. Everything has a bit of a minimalistic feel and while this may have been the result of budgetary or time constraints rather than pure design choice, it never feels forced or out of place. Everything compliments each other so well, it gives the game a real personality and helps it stand out.

Throughout the game, we are serenaded with well-known pieces of classical music, which act as a great accompaniment to the inter-galactic setting and is one of a few subtle nods to the film it is paying homage to. There is also a nod to an earlier game by National Insecurities, Disorient on the Murder Express. This come’s in the form of Poisoniscine which can cause slight elbow discomfort and sudden death in a variety of settings!

The voice acting is perfect for the dry, dark humour. Both ground control and MAL provide some genuinely funny moments, these are even more apparent when juxtaposed with the really quite sinister, murder-ridden nature of the story. The comedic elements of this game are the real highlight for me and there is some truly brilliant writing. Take a second to appreciate this glorious bit of alliteration:

I’ve spent a couple of hours playing and have completed the game 3 times now, there isn’t any obvious replayability but I’ve picked up on extra bits and laughed more each time. The controls are straightforward and smooth, which I appreciated given my ineptitude manoeuvring in zero gravity in-game environments! It uses it’s short playtime well and presents a well constructed and complete narrative with a satisfying murder mystery conclusion. Overall, 2000: 1: A Space Felony was a joy to play and I’m really looking forward to playing the developers’ next project!

If you enjoyed this, you might also like some of the other indie games we have reviewed!