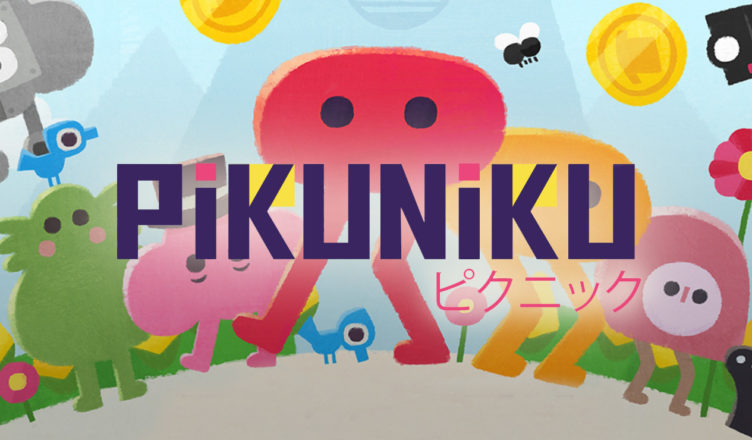 Pikuniku is a platformer game by XX, with an interesting mix of a cutesy and dystopian setting. You play as Piko, who only just woke up after a long slumber, to find out that the nearby village is giving up its corn supply to Sunshine Inc. in exchange for “free” money. As you progress through the game, you find the world is not as happy as it seems, with cameras emerging to watch your every move, Sunshine Inc. taking away necessities such as food and housing, and even a rebel movement! It can be played in Adventure mode solo, or in a separate cooperative mode (which I am not covering here).

Pikuniku makes clever use of platforming mechanics, combining both Piku’s available abilities and the world around them. Piku can jump, roll and kick, all three used for various activities such as pushing rocks or breaking boulders, or sinking in water by rolling. The world includes elements such as puzzles, hidden pathways and metroidvania staples like areas that need an ability to be accessed.

The game isn’t too difficult and can be completed in no time (I beat it in just under 5 hours and that’s while liberally exploring the island), though it does have slightly harder sections such as dungeons and the boss fights. By and large though, puzzles form half the game, ranging from electricity piping to stealth missions! The other half is comprised of quests such as drawing a better face for the valley’s scarecrow, as well as minigames.

What really sells Pikuniku is the setting and the humor. It treads the line between easygoing and dystopian surprisingly well, and it shows in the dialogue as well as the game’s minimalistic art style. The dialogue shines in how most characters are oblivious to the world around them but focus on issues that are small in comparison, or in how the valley village thinks Piku is “the beast.” The usage of lowercase in the dialogue is a nice touch.

The art style is minimal, yet it works amazingly well with how it uses bright colors, giving a childish yet extremely polished look and feel. The animations are also fluid and smooth, which you can see mainly in how Piku moves, particularly when they kick. The music is cheery and bright, too.

I wish the game had more content, especially post-game, where new problems and challenges can be introduced without changing much of the main game. While the dialogue is well done, some of the characters aren’t as fortunate. Despite being centric to the story, I don’t know the names of the rebels, and each rebel is lacking a distinct personality despite doing well as a group. Another thing worth noting is that some parts of the game are inaccessible after first completing them, which may lock you out of some achievements. The other thing is that the Collector achievement on GOG seems to be unattainable, with Galaxy itself saying it was unlocked by 0% of all players, yet other achievements work.

As an interesting take on a dystopia, I recommend picking up Pikuniku, but when on a sale as I don’t think its length justifies the $12.99 price tag. I love the game and the effort that went into making it, but I would love it more if I saw more content in the game!

For a cute and colorful game, check out Purrfect Date! For a purely dystopian game check out the aptly named Orwell!