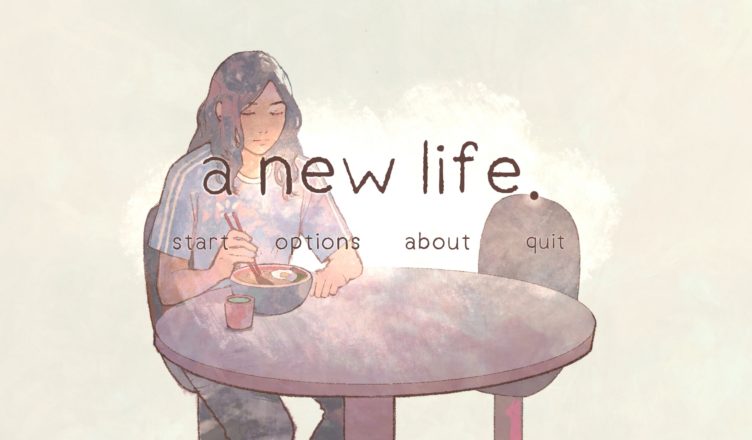 “Though lovers be lost, love shall not; And death shall have no dominion.” – Dylan Thomas

a new life is a simple but captivating new visual novel by Angela He, creator of the equally beautiful missed messages. The game claims to be a classic love story of meet, marry, grow old; however, the branching dialogue trees and consequences mean that things do not always work out as planned.

a new life’s story follows the romantic relationship of May and August, from their initial meeting through to one of seven emotionally-charged endings. All outcomes can be experienced within about an hour of gameplay and can be reached through the various dialogue choices dotted throughout each chapter.

The options and subsequent effects have a refreshing lack of predictability (in early playthroughs, at least) with small decisions often having surprising yet plausible repercussions of some magnitude. One example of this is a request for snacks resulting in the protagonist’s love interest having to go to the hospital!

Both of the game’s leading ladies are endearing, well-rounded and believably individual examples of characterisation. Dialogue and general representation of the characters are relatable and emotive, a testament to a new life’s successful narrative design and writing and is definitely the highlight of the experience overall.

The game’s art style is beautiful and instantly recognisable as He’s work. It features a soft pastel and watercolour style aesthetic and uses a range of colour palettes to compliment the tone of the storyline. This is matched perfectly by the relaxing, and sometimes melancholy, lo-fi soundtrack and its cute, minimal but heartfelt lyrics and soft, dulcet vocals.

a new life is a short but stunning example of a visual novel, cleverly weaving its narrative and subtly pulling on heartstrings to elicit a genuine emotional response from the player. At its centre, the game is a touching portrayal of love, loss and loneliness that I recommend highly; it may well make you cry, but it’s worth it!

Looking for more reviews of LGBT+ games? Why not check out:
If Found – Curtain – Starcrossed