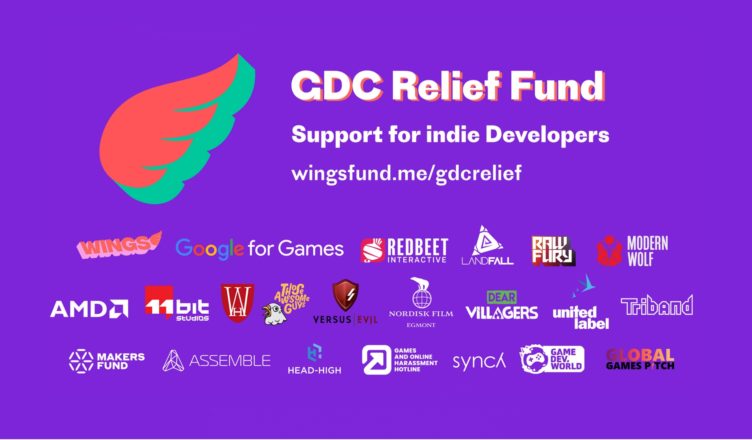 “Adversity draws men together and produces beauty and harmony in life’s relationships, just as the cold of winter produces ice-flowers on the window-panes, which vanish with the warmth.” –Søren Kierkegaard

Developers around the world have been unexpectedly and severely affected by the cancellation of the Game Developer’s Conference (GDC) and other repercussions of the ongoing global crisis. Some have been left stranded abroad, in thousands of dollars in debt from non-refundable fees and lost business opportunities.

In response to this, generous game developers have teamed up with itch.io to create an eclectic bundle of games, assets, art, music, code, and prototypes (including a number of games created during itch.io’s recent relief jam). The bundle is available from 30th March – 3rd April 2020 and all proceeds go towards The GDC Relief Fund spearheaded by WINGS Interactive, which provides financial aid to developers financially impacted by the cancellation of the Game Developers Conference.

Nuclear Throne is an ‘action roguelike-like’ with both singleplayer and local multiplayer modes. The game is essentially about mutants fighting for the throne in a post-apocalyptic world made up of 7 main areas spanning deserts, frozen cities and more. The variety of dangerous environments are juxtaposed by the cute, retro-style pixel art and matching UI.

Each of the 12 unique playable characters can mutate further and in a variety of different ways (such as generating new limbs on the fly) all courtesy of the plentiful radioactive waste. Weapons are in no short supply and Nuclear Throne boasts over 120 different armaments ranging from the machine-guns and shotguns to more obscure offensives such as a screwdriver or ion cannon.

A typical game session should last around 30 minutes but the rogue-like nature of the game, along with its multiplayer option and plethora of map, character and weapon combinations mean it offers a ton of replayability making it a highlight of the GDC relief fund bundle.

Catlateral Damage is a first-person mischievous cat simulator. Players take on the role of a destructive house cat, rampaging through every room in the house, swiping objects to the floor with its paws in either objective or litterbox mode.

The game features a plethora of objects to be destroyed, these are amongst a selection of collectables (including over 230 photos of real-life cats) that grant power-ups and unlock other playable cats. There are also a number of objective milestones that add a sense of progression and also unlock additional felines. Its cute but distinctive art style matches the gameplay perfectly, but whilst the music is pleasant the sound effects are very minimal.

Catlateral Damage is a silly and strangely relaxing game better suited to short play sessions, but its variety of rooms in procedurally generated houses, objectives, collectables and unlockable items mean that it can be revisited a multitude of times and still provide something new.

A Mortician’s Tale is a story-driven death positive experience in which the player takes on the role of a recent funeral direction graduate Charlie as she learns the ropes of the business and industry. Tasks include preparing the bodies of the deceased (via embalming or cremation), attending their funerals and listening to their loved ones’ stories, as well as interacting with her coworkers, clients, and bosses.

The game handles its delicate subject matter in a respectful and thought-provoking way, providing an informative, honest, and sometimes humorous look at the current state of and the future of the western death industry. The writing is excellent and provides a real sense of who the different characters are and their motivations as well as telling a touching overarching story. Additionally, the simplistic and very charming 3D art style manages to feel totally appropriate and the minimal music is used to emphasise more poignant moments and invoke emotion.

A Morticians Tale will take about an hour to play and is, overall, a fantastic example of interactive fiction that encourages players to take a closer look at an uncomfortable yet inevitable aspect of life in a clever and entertaining way without ever feeling tactless.

Fugue combines maths and music in a relaxing black and white puzzle game. Players must solve mathematic puzzles by rearranging birds in order for the main bird to nest, making music and creating melodies in the process.

The game has a simple sketchy art style on a crumpled paper background, the aesthetic elements of Fugue are beautifully implemented and really suits the style of gameplay. The music is largely created but he player themselves but ambient sound effects add atmosphere to the varied but otherwise basic puzzle settings.

Fugue has a four different worlds consisting of a total of 75 levels of increasing complexity. Overall, it is a pleasant and relaxing experience that manages to successfully balance its casual nature with its ability to provide a challenge.

Other Ways to Help

In addition to the above collection, Humble have released a ‘Conquer Covid-19 Bundle‘ of games, books and audiobooks at a fixed cost of $30.00. The Bundle is available until 7th April 2020 and all 100% of proceeds go to a selection of charities directly responding to the current crisis, Direct Relief, International Rescue Committee, Doctors Without Borders, and Partners In Health.

Looking for ways to pass the time, why not take a look at David’s list of time sink games, or check out some of our reviews for free games?