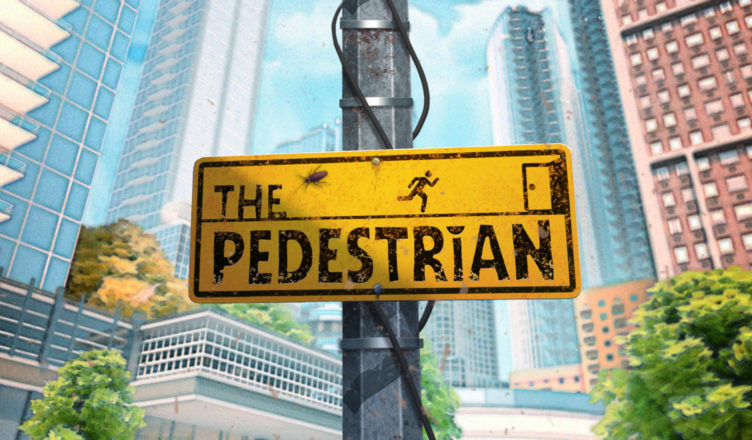 “The City was the acme of efficiency, but it made demands of its inhabitants.” – Isaac Asimov,

Beginning life in 2013, an educational side project originally called ‘Bathroom Break’ grew and evolved into The Pedestrian, a 2.5D side-scrolling puzzle-platformer with a vibrant urban setting. The game was well-received when exhibited at a local gaming convention in 2015, its 2017 Kickstarter campaign ended at over 50% of the initial goal and after nearly 7 years of work, it was released earlier this year.

The Pedestrian is a puzzle-platformer with an emphasis on its heavily logic-based puzzles over the jumping and dodging. The protagonist traverses various street signs, progressing to the next section by completing a set of challenges. Solving the game’s main puzzles often requires collecting a number of items from other areas which in-turn involve puzzles and platformer style obstacles.

The game eases the player in with a tutorial-type start that introduces mechanics one at a time, allowing time to adjust and understand each element. At first, The Pedestrian’s difficulty curve seems gentle but hits a right angle in the latter half with a sharp and sudden increase in complexity. However, death is not punishing and simply restarts the current section of the larger puzzle. Additionally, whilst the puzzles are confusing at times, they are ultimately satisfying rather than frustrating because the solutions always make sense, relying on logic and observation.

The Pedestrian gently introduces you into the game’s mechanics, which include navigating through street signs, chalkboards and more. Each puzzle has you rearranging the positions of the signs as well as connecting them with doors and stairs, with the goal of advancing to the next area, usually with a required item. The signs themselves contain puzzler staples like deadly lasers, pistons blocking the way, or platforms that are too high for your character’s jump.

Each puzzle is a multi-layered network of obstacles to work around and solve, and The Pedestrian keeps you hooked with them. The puzzles are of the right difficulty, not too easy and not too hard. Unfortunately, the difficulty curve does spike closer to the end, with complex puzzles requiring less obvious answers than the ones before them. That said, all the puzzles are great, and as you play the game, you’ll find it subtly showing some of the finer mechanics that you’ll use in solving later puzzles and recalling them whenever you get stuck.

The Pedestrian takes place on simple street signs against a mix of detailed, industrial and metropolitan backdrops ranging from grubby to colourful and bright creating an interesting contrast. Overall, the art style is clean with polished models and atmospheric lighting.

The music is cheerful without being overly lively or garish and was even relaxing at times. However, moments devoid of music, along with ambient diegetic sound effects help to really immerse the player in the city setting. It’s also worth noting that the gameplay and extremely minimal narrative are intentionally textless and without dialogue so that The Pedestrian can be universally understood. However, several pages on the train’s instruction clipboard contained ‘Lorem Ipsum’ placeholder which was hopefully an oversight rather than laziness.

The Pedestrian makes great use of its drawing mediums and backgrounds. Your character will move across and be drawn on street signs, blueprints, paper, chalkboards, and even graffiti. This is accompanied by vibrant metropolitan backdrops like factories, cities or a university, and all of them are detailed, from brand names to advertising to the hula doll inside the train.

The music is lively and fitting for the backdrop of the area you’re in, and makes for great company when you’re solving the puzzles. I wasn’t a fan of the music going silent after some time, and only returning after progressing past the current set of puzzles, which may take a while sometimes.

Overall, The Pedestrian is aesthetically pleasing and will provide around 6-7 hours of satisfying gameplay. It has a surface level simplicity that, along with the gradual introduction of puzzle elements make it very accessible whilst also providing a real challenge, especially toward the end of the game. It is clearly a labour of love and I’d definitely recommend it to fans of puzzle and puzzle-platformer games, however, it definitely places emphasis on problem-solving and might not be for anyone looking for a more fast-paced platformer focused experience.

The Pedestrian is a lovely and unique take on the puzzle platformer. It utilizes both its style and setting and intertwines it with the puzzles, resulting in an excellent blend. The game is not too challenging but manages to balance the difficulty well enough to keep you engaged, and the answers to the puzzles are logical and well telegraphed. I more than recommend it if you’re looking for a puzzle platformer fix!

If you enjoyed this and want to try some more puzzle-platformer games, take a look at the following reviews:
GRIS – Birdgut – Pikuniku – Repressed