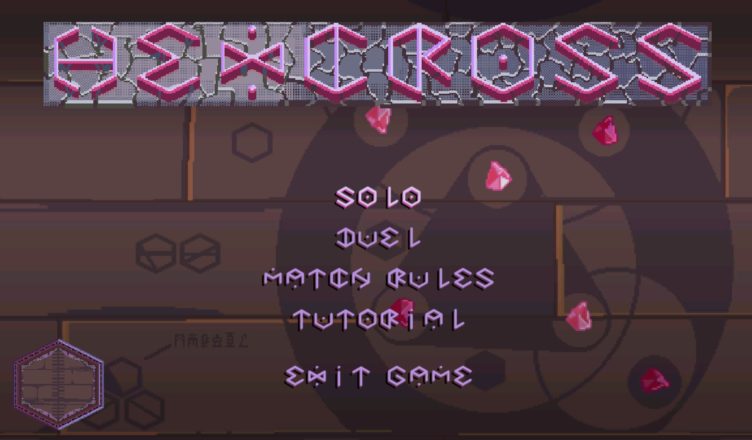 Indie Hive received a free copy of this game for review purposes.

Hexcross is a versus puzzle game by developer MetaHobby, in which you take turns against an AI (or your friend in pass-and-play duel) to form lines with your color and avoid forming a triangle with three of the board’s stones as its points, also known as “hexing,” while also attempting to coerce your opponent to eventually hex and lose.

The game takes place on a hexagonal board with six “stones’ on its points, and to form lines, you tap on the first stone and then the second. The opponent does the same with their own color. Each match has a predefined number of rounds you need to win.

The game features seven AI levels with increasing difficulty, or you could play a regular game against the AI or a human player. The game also supports custom match rules (for example you can set the time taken per turn to none or to as quick as 1 second long, or you can set the ability to deselect your beginning stone to choose another), though you need to change the match rules once for them to be in effect (the default ones do not reflect what is pre-selected in the match rules screen, probably a bug). Beating the AI levels unlocks new boards and more soundtracks to use elsewhere in the game.

I like that the game is another take on simple games like tic-tac-toe, where you must think several steps ahead of your opponent to prevail, or in the case of extremely short turns, reading your opponent before you react. The match-and-round approach also adds to the tension in particularly fierce games.

The art is certainly nice, although the board tilts with your phone’s accelerometer/gyroscope, which may throw you off initially (there are no toggles to turn it off at the time of writing), and the boards can be simple and out of the way, or as elaborate as can be. My biggest issue with the art is the font choice used for regular text; which did not help with the tutorial. I thought you must win by forming triangles rather than avoiding doing so. The music serves as a nice background, although not memorable enough outside of the game, it works well with the game involved. Finally, this is more of a minor setback, but the settings screen feels out of place, which leads to a menu with four options, including a second settings screen. This could be rectified so that it feels more natural. I’d also suggest a “set BGM” feature with optional looping rather than changing it every time you tap any of the audio settings.

I’m also giving bonus points for having no DRM. Hopefully, the developer releases the planned PC version on itch.io as well. However, I must wonder about the price tag. While $2 is cheap by its own right, I think it should be justified by offering more content and more game modes (such as a survival one) via updates, as Hexcross isn’t the only $2 mobile game on the Play Store. This should be considered even more on the Apple App Store, where the price tag is $3.

Hexcross is a versus game that will keep you thinking of your next move, and while I think it needs to be able to justify the price tag compared to other games, I more than recommend it if you like games where you have to out-think the opponent.

You can also check out our reviews of other mobile games here.