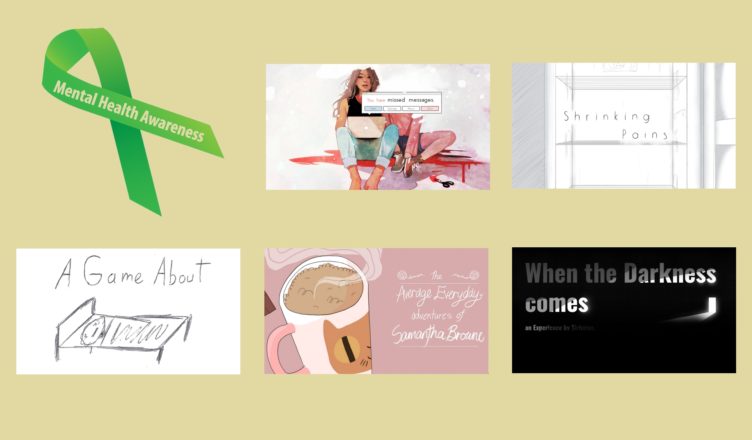 “The order of the universe is like a gem with many facets, and we see only one, that which reflects the existence of our own world.” – Raymond E. Feist

There are a plethora of free games available that claim to tackle mental health issues; some are sensitive and insightful portrayals whilst others miss the mark, offering limited exploration, misrepresentation or even just using the subject matter as a trope. This article takes a look at a series of games pertaining to issues such as anxiety and depression and explores the varying level of success with which they navigate them.

NOTE: The games discussed below explore sensitive and mature subjects matters including various mental health issues and some sexual themes.

The Average Everyday Adventures of Samantha Browne is an interactive story about a painfully introverted college student. The game centres around the seemingly simple objective of helping Samantha to make oatmeal in the communal kitchen of her dorm. Unfortunately, despite the interesting premise and adorable artwork, the game falls short on a number of accounts.

The less problematic flaws within the game include a simple and repetitive soundtrack, matching gameplay, and total lack of game options. The latter is especially puzzling given the game was created in Ren’Py which includes options such as volume sliders and basic display preferences as default. However, the real issues arise from the limited narrative exploration of social anxiety and the confusing portrayal of the introverted protagonist.

The game introduces the protagonist with the line ‘Her name was Samantha Browne and there wasn’t anything particularly interesting about her.‘ a possible attempt to make her relatable that comes across as somewhat snide. Samantha herself is not a likeable character, her thoughts and comments reveal her to be rude, aggressive, entitled and angry and while these characteristics are unrelated to her introversion the game utterly fails to make this distinction.

Some aspects of the protagonist’s thoughts and behaviours will undoubtedly feel relatable to some introverts and people who have suffered with extreme social anxiety but the game fails to provide any insight for those without this prior understanding. Essentially, The Average Everyday Adventures of Samantha Browne is too short and limited an experience, providing a very narrow viewpoint and a one-dimensional character that potentially only serve to add to the ongoing problem of mental health stigma.

missed messages is a short game that describes itself as ‘a romance/horror story about life, death, and memes’. The player starts in their room and throughout the day has to balance work, friendship with her roommate and a potential online relationship. There are four possible long-term outcomes from the player’s actions and varying consequences for the protagonist and the surrounding characters.

The game captures the potential awkwardness of opening up about mental health well and provides an insightful and heartfelt experience. It manages to convey a lot of emotion in a short time and whilst sometimes a little heavy-handed with the subject matter, it was clearly created with understanding and good intentions.

A Game About is an experimental point-and-click game and slice-of-life experience that aims to recreate the crushing weight of living through the most basic routine. Through simple day to day choices, the player can cause the protagonist’s life to change in subtle and unexpected ways.

The game’s protagonist loses their job at the start of the game and it is up to the player to decide how the character will spend their days following this event. Options include helpful activities such as job hunting and yoga alongside less healthy choices such as sleeping or watching TV all day. Additional activities become available through progression depending on previous choices but the protagonist’s ability to enjoy or engage in different pursuits also varies as time goes on. For example, an early response to volunteering at an animal shelter is much more positive than a later one.

A Game About does a great job of illustrating the fluctuating nature of mental health problems, it doesn’t sugarcoat the subject matter but also avoids depicting it as character-defining, fixed or as a constant state of negativity and clearly shows the ups and downs of depression. The overall representation has a hopeful feel to it and the game even includes a tangible breathing exercise that players can practice in game.

In general, the game provides a well balanced narrative experience and a multi-dimensional character that combine to create a relatable and illustrative portrayal of the mental health issues. A Game About is often bleak but also sincere, honest, sometimes humourous and never insensitive, it clearly draws on personal understanding of the subject matter and is a beautifully engaging experience overall.

When the Darkness Comes is an obscure, psychological horror with strong themes of anxiety and depression. It mixes a range of mechanics and game genres, such as platformer, puzzle and horror, to great effect and is an excellent example of gameplay being used to elicit an emotional response from the player.

In general, it is a clever and impactful depiction of anxiety but falls short right at the start with a somewhat patronising trigger warning. While it absolutely needs to be there, as the game does cover some very dark subject matter, the wording was condescending, essentially advising anyone with mental health problems to avoid the game without question. Not only does this discount people’s ability to manage things like anxiety and depression but also discounts their decision-making abilities and detracts from the understanding demonstrated in the game overall.

Made in 48 hours for the Global Game Jam 2018, Shrinking Pains is a short narrative experience that explores a semi-autobiographical struggle with anorexia. The player must navigate the player’s life and relationships whilst also trying to manage the eating disorder. The game has some simple but effective styling with sketchy black and white visuals and gentle background music that work really well given the 48-hour timeframe for development.

The game examines anorexia through the impact it has on everyday situations, relationships, social interactions and a range of other things that a lot of people might take for granted providing a multi-faceted look at a complex disorder. Alongside the self-deprecating thoughts and damaging behaviours of the protagonist themselves, we are also presented with signs of deteriorating physical health, the concern of loved ones and subsequent break down of relationships.

Shrinking Pains steers away from stereotypes portraying eating disorders as a product of vanity and touches on possible underlying cause and contributing factors such as depression, anxiety and trauma, a point that it emphasises by removing the element of choice as the character’s condition worsens, indicating an increasing difficulty to make the right decisions.

The promise of multiple endings is misleading as outcomes are in fact quite limited and have the potential to be tragic. This was undoubtedly due to time constraints but unfortunately just works in tandem with the short narrative and very limited exploration of the disorder to create what feels like something of an incomplete experience.

Overall, whilst Shrinking Pains is definitely a step in the right direction in terms of mental health portrayal in games, it is too bleak and morosely one-sided, lacking any sense of hope or positivity and it is a shame that more time wasn’t taken to address these problems and refine the game following the initial game jam development.

For other reviews of games exploring mental health issues, take a look at:
Still There – GRIS – She Dreams Elsewhere