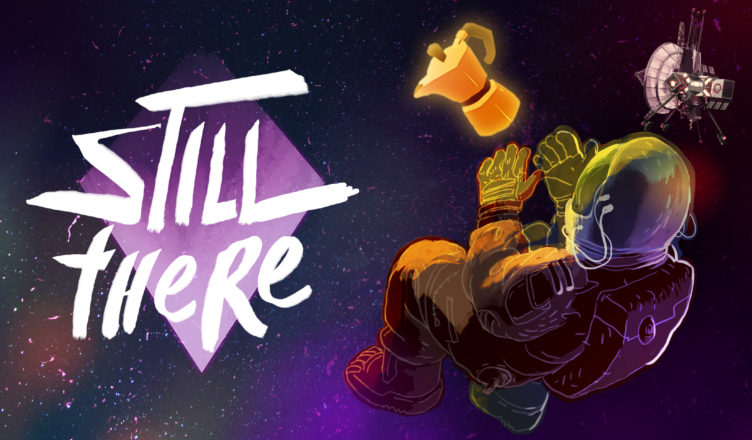 “Do you think that I count the days? There is only one day left, always starting over: it is given to us at dawn and taken away from us at dusk.” – Jean-Paul Sartre

Note: This game has a PEGI 16 rating which will be reflected in this article.

Still There pegs itself as ‘a sci-fi adventure into space station management, mysterious radio messages, motherfucking AIs, sociopathic people in charge, and finding one’s true self in a galaxy way too far, far away‘, a description that reflects the overall tone of the experience it provides.

A well-mixed cocktail of genres, the game is a psychological adventure executed in a point-and-click fashion, featuring some mind-boggling puzzles and an engrossing sci-fi storyline. The game also manages to implement both the immersive narrative and the satisfying puzzles with an element of humour and silliness that provides contrast and make the deeper moments even more poignant.

The game begins with the protagonist, Karl Hamba waking from a dream to yet another solitary day aboard the Bento, a space lighthouse. The ship’s AI, Gorky, explains the daily tasks with a heavy dose of sarcasm and activity commences straight away.

Still There utilises a variety of mechanics and puzzle types, from the more typical, inventory style, object-based point-and-click type, to really complex, detailed and really quite challenging traditional logic puzzles. These centre around general ship maintenance and other regular tasks but become increasingly interesting and more complex following a distress call.

The game is divided into six chapters, each one featuring a particularly challenging puzzle that makes up the bulk of that chapters gameplay. Every one of these puzzles is directly tied to the narrative and often involves repairing something or having to use new equipment. This requires the player to pull information from a variety of sources, such as the control panel and a technical manual, and remember a fair amount of information, as such, using a second monitor or notebook can be helpful.

The problems are complex and the solutions detailed, increasing in difficulty throughout, but the game does provide the option to simplify the puzzles at the expense of achievements, Indicated by a maze icon on the bottom right of the screen. This is a positive addition considering the game also has a heavy narrative focus and that some of the puzzles really are mind-bending.

As the game progresses, Karl attempts to help the distressed caller whilst simultaneously beginning to build a relationship with them, driving the progression of the narrative and unveiling details of Karl’s past and present situations. All part of a deep, interconnected storyline that is also revealed through dreams, journal entries, past emails, objects scattered around the Bento, and dialogue.

Despite the vast and satisfying array of puzzles presented to the player, Still There does not compromise on its emotional narrative. The game delivers a clever story and unexpectedly interwoven character as complicated as some of the puzzles. It has some existential undertones and touches heavily on themes such as grief, depression and isolation whilst remaining firmly within a sci-fi setting. The game as a whole is fairly linear, and at first, the story feels so too, but as the player is drip-fed information through the various narrative techniques it is revealed to be a deep, complex and fragmented tale, full of secrets and surprises.

Still There is also a very funny game, with a scattering of mature humour in both the environment and the dialogue but also the endearing sarcasm of the AI. The nature of some of the humour means it could easily detract from the sentimentality of the experience as a whole but instead, manages the opposite. Impressively, the comedy is juxtaposed with the more ominous and darker elements of the game in such a way that it emphasises their emotional nature and overall intimacy.

In addition to all of the above, the game also includes other daily activities and things to engage with, such as chess with Gorky or taking care of the pet tuatara, all of which add to the sense of immersion this title provides.

The game’s environment is relatively small, consisting entirely of the windowless Bento, but it is littered with details that really help bring it to life for the player. The main art style has a cartoon-like, retro feel to it that fits nicely with the sci-fi setting but the game also features some fantastic hand-drawn art that can be seen sometimes in dreams, but mainly in photos and other similar objects.

The soundtrack (available on Spotify) has a similarly retro vibe to it, featuring keyboards and synthesizers which complement the aesthetics really well. However, it can also be very emotive or dramatic when appropriate and the game features some beautiful melodies and ambient music. The sound effects were also very atmospheric, adding drama and tension when needed, but also the odd bit of silliness. In general, the various stylistic elements of Still There work in tandem with each other to positively accentuate the narrative, gameplay and overall feel of the game.

Still There is a unique game in that it combines various elements successfully without sacrificing the quality of any single thing. The puzzles are varied, interesting, sometimes infuriating and always satisfying yet the simplification option means that the meaningful narrative isn’t barricaded behind a difficulty wall and players aren’t prevented from experiencing the culmination of the storyline’s various threads and miss the ending. This shows respect for player choice but also places equal importance on both of the main aspects of the game, reiterating that it is a narrative-driven, puzzle game and not just one or the other.

There were some things in the game that were slightly less than ideal. For example, the game is almost entirely controlled with a mouse and interacting with objects involved clicking once and then clicking again to select from between one and three small icons, usually to either view, use or put back the item in question. This felt finicky at times and a combination of left, right and middle mouse button clicks would have felt more organic, but this was a minor bugbear in an otherwise exceptional game.

Overall, Still There is a fantastic example of a variety of individual genres and game types, and most impressively of how they can be so seamlessly combined to create a truly engaging and meaningful experience, one that I would highly recommend.

If you enjoyed this review, you may also like the following games set in space!
Shortest Trip to Earth – 2000:1: A Space Felony