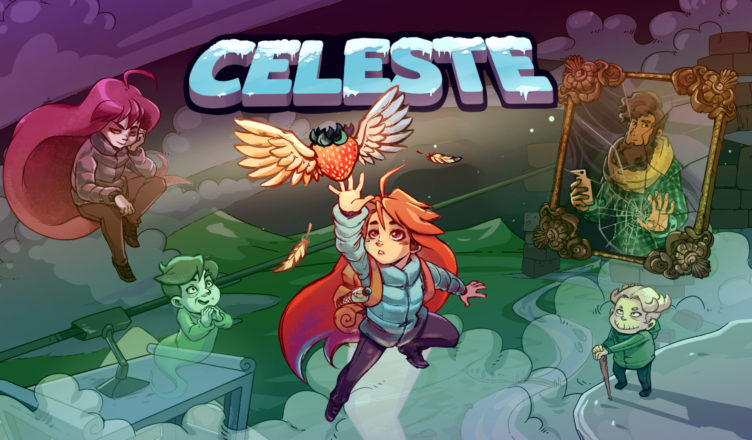 Celeste is a 2D platformer by Matt-Makes-Games (developer of Towerfall) and a reimagined version of the original PICO-8 game of the same name, centered around climbing the mysterious Celeste Mountain. Taking control of Madeline (whom you can rename), you help her overcome the various dangers of the Mountain.

The journey to the summit is far from straightforward, however. Not only does Madeline have to overcome the physical dangers, but she also must conquer her depression, panic attacks, and fear, all of which the Mountain uses against her without mercy.

The core gameplay revolves around three pivotal mechanics: jumping, dashing, and climbing walls, in addition to other environmental elements. You can dash once in any direction until you land on the ground, and you can climb walls up to a certain point before getting tired and sliding down.

Celeste’s difficulty comes from the often brutal level design and challenges such as boss fights. While the game is not impossible, getting past most rooms is easier said than done. There are tons of spikes everywhere (almost as plentiful as in VVVVVV), large chasms are abundant, and there are level specific mechanics that work for or against you, such as the wind. You can record hundreds of deaths per level.

With all that said, dying quickly sends you back to the beginning of the room, allowing you to retry as many times as you can, and I never felt I was stuck for too long in any given area. While frustrating a lot of the time, Celeste’s challenges and bosses always felt great to overcome. The game includes an assist mode if you want to play the game without the challenge, which is useful if you only want to explore the story and lore.

Celeste uses its beautiful pixel art to great effect. The game succeeds at conveying the otherworldly atmosphere of Celeste Mountain by utilizing effects such as lighting, shadows, reflection, and distortion. The audio is a strong suit for the game as well, with memorable character themes, as well as music tracks that match the mood of the levels.

Celeste is one hell of a journey, a challenging yet heartbreaking one. In a sense, it is like scaling an actual mountain. I recommend the game even at full price, even though it’s not a game for everyone. That said, the game was given away on Epic for free and was a part of itch.io’s Racial Justice bundle, so if you didn’t miss either, chances are you already have the game!

Interested in other tough-as-nails platformers? We’ve got you covered!
Rage in Peace – Cuphead – Batman Returns (SMS)