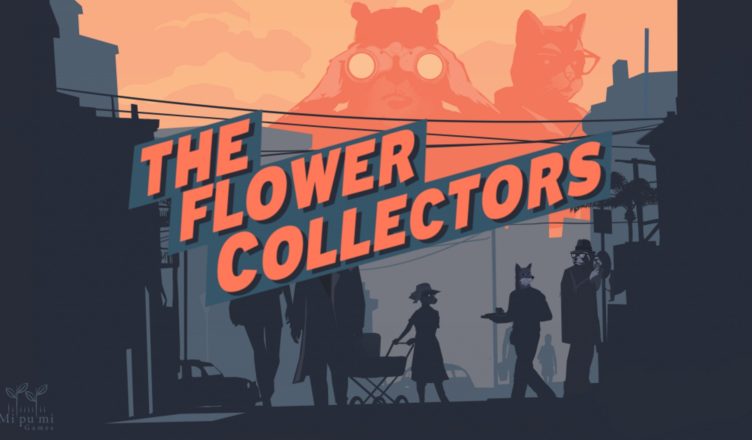 “That’s a secret, private world you’re looking into out there. People do a lot of things in private they couldn’t possibly explain in public.” – Detective Doyle (Wendell Corey), Rear Window

The Flower Collectors is a detective noir, murder-mystery in which the player takes on the role of a wheelchair-bound, ex-Policía Jorge as he tries to solve a crime from his balcony with the help of a young journalist. Set in Barcelona in 1977, the game’s narrative is intertwined with the complexities of a post-Francoist Spain just before its first free election in four decades.

After witnessing a shooting from his balcony, Jorge pairs up with Melinda, a young journalist he meets by chance, to solve the murder. Confined to his first-floor apartment Jorge uses binoculars, a camera and transmitter radios to spy on his neighbours and help Melinda sneak around and investigate on the ground. There are obvious parallels between The Flower Collectors and the Alfred Hitchcock film Rear Window, not only in terms of the plot but also the highly voyeuristic nature of the protagonists and their actions, an aspect of the game that felt undeniably uncomfortable at times.

Simple objectives such as what to look at with the binoculars, who to question and what information is needed, are consistently shown in the top corner of the screen and while these are helpful at first, the game continues to hold the player’s hand well past the initial tutorial. This not only limits the sense of autonomy but also makes the game less exciting as it begins to feel like working through a list of instructions rather than actually solving anything.

Jorge is limited to his apartment but while this is a 3D environment that the player can navigate, the majority of the investigation takes place in areas that he must explore via a proxy (Melinda), from a fixed, distant viewpoint and with no direct control. With only a broken elevator and vague anecdotal explanation for the wheelchair, it seems a distinct possibility that Jorge’s mobility issues were shoehorned into the game to limit the areas that can directly be explored by the player and reduce the development workload and cost.

The overall visual styling of The Flower Collectors was somewhat lacklustre, with low-detail environments, characters and models that are very minimally textured and clunky animations that feel about 15 years out of date. NPCs can be seen walking clumsily along fixed routes and walking through stationary objects like tables or instances where Melinda collides with and pushes the player. While the aesthetics are charming in their own way, the lack of production value in such a short game (around 4hrs) makes the £19.99 price tag rather hard to justify and begs the question of whether animal characters were chosen based on the relative simplicity of modelling them compared to humans.

In contrast, the game’s sound effects were marvellously implemented, making clever use of virtual surround sound to help create the environment and immerse the player in it. The voice acting for Jorge’s character was another highlight with his stoic, gravelly voice revealing just the right amount of emotions and suiting the detective noir themes perfectly. Unfortunately, the elderly neighbour Doña Anna is voiced by a younger actor putting on an ‘old voice’, this is painfully obvious, disrupts the representation of that character and serves to break the immersion.

The narrative design and plot are by far the best features in The Flower Collectors, it is an interesting murder mystery story with a historical setting that allows it to touch on some heavy political and social themes. While it certainly isn’t breaking any boundaries or reinventing the genre there is some interesting character development as the player sees Jorge reevaluate his past behaviour as a result of seeing it from the other side as an outside observer and voyeur.

Much like the over-abundant list of objectives, however, the game slowly pieces the story together for the player, molly-coddling and over-explaining the key points and spelling out the obvious. For example, a list that has a title, clearly stating its purpose has it’s meaning revealed long after it should have been obvious to both the player and the protagonist. This potentially indicates a lack of faith in the intelligence of players but also limits interaction and negates what could have been fun, puzzling aspects of the game.

Overall, The Flower Collectors was an enjoyable experience with a familiar but intriguing narrative and fascinating social setting. However, the low overall production quality, particularly in terms of the aesthetics, along with the short playtime and the limitations imposed by certain development choices (which in turn, feel like cheap crutches) make this game hard to recommend at full price despite the positive elements.

For more opportunities to play detective, take a look at:
Once Upon Crime in the West – Backbone – Her Story – Obra Dinn