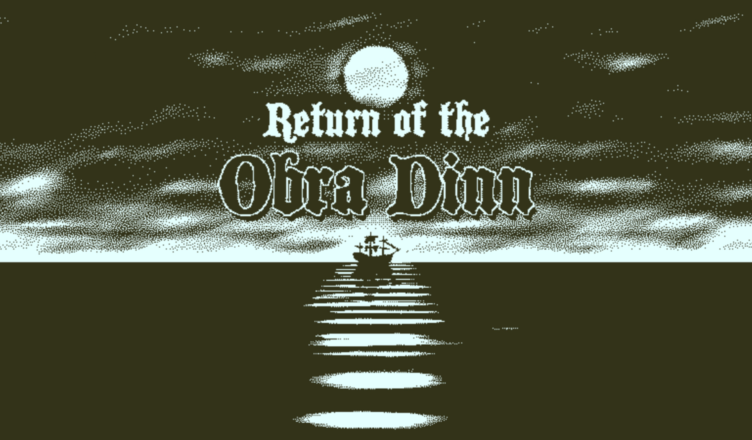 There is nothing more enticing, disenchanting, and enslaving than the life at sea.” Joseph Conrad

David and Rachael both played and enjoyed Return of the Obra Dinn. Read both their thoughts below in Indie Hive’s first 2-for-1 review!

Return of the Obra Dinn is a murder-mystery, puzzle game set aboard the Obra Dinn. The player takes on the role of an insurance investigator, tasked with deducting the identities and fates of the 60 passengers and crew-members. Events are revealed via the use of a mysterious pocket watch and must be documented in a book, partially completed and entrusted to you by a Henry Evans. The journal contains a map of the ship, crew manifest, pictures, and a glossary in addition to chapter titles and blank pages.

The book must be completed in order to reveal the contents of the final chapter. The first series of events shown to the player happens at the end of the story and the narrative continues from there in a sporadic and non-chronological way. This method of delivery really added to the enigma and enhanced the overall mystery of the story. However, the locked chapter was somewhat disappointing, it wrapped up the story neatly but didn’t provide the twist I was expecting and felt a bit lacklustre. Nonetheless, the compilation of 60 stories into one overarching, and consistently intriguing narrative must have been a logistical nightmare and is an impressive feat, especially for such a small team.

The puzzles were challenging (and sometimes confusing) but heavily based on logic so very achievable. Finding some solutions requires a fairly meticulous eye for detail, and while this increased the difficulty it’s ultimately what made the game so satisfying. It’s worth noting that there is more than one acceptable fate solution for a small number of the identities aboard the Obra Dinn.

Return of the Obra Dinn is an impressive game. When I saw it initially released, I never thought it was a deep experience, where attention to detail is most necessary. Climbing aboard the abandoned Obra Dinn, you must use a mysterious pocket watch that lets you view the last moments of a dead person’s corpse and discern who died, how and who did it. The game doesn’t hold back, requiring you to figure out the identities of the 60 crew and passengers, but it gives you a helping hand by verifying any correct information you find in groups of threes.

You will be looking at every little detail to discern who is who, arguably the hardest part of the game. While some of the people are easy and straightforward to figure out, some require taking note of traits and even through an outright process of elimination.

The stark art style of Return of the Obra Dinn can take some getting used to. It consists mainly of two-tone pixel art but makes fantastic use of such a minimalist look that was probably, at least in part, inspired by budget. There is a good level of detail in the environment and scenery, and the styling feels in keeping with the game. There are not many options in terms of graphics settings, but it is possible to change the appearance of the game in terms of its colour which could potentially make it easier on the eyes if needed.

The Return of the Obra Dinn has minimal dialogue but the voice acting is nice and used well with the sound effects and music to create a lively and dramatic nautical feel. There were a few noticeable loops in the music but it is atmospheric without being overbearing or intrusive. It is used sparingly and complements the minimalist visuals.

What strikes me best about the game is the presentation. You only get to hear what happened moments before a death occurs. The only details delivered to you before death is what was said, ambience and other sounds, and the game excels in all of them. You can even try and tell who was close to the dying person by listening carefully. The moment a death occurs, your insurance investigator gets teleported into the scene of the death, and he can then explore and see what was going as time is frozen. They cannot interact with any of the surroundings, i forcing them to compliment them with the audio cues to figure out what exactly happened.

Nearly every one of the 60 people on board has a subtle story to share about what life was like on the Obra Dinn and their thoughts and interactions with people. Perhaps the only complaint I have about the game is that the way it is setup also makes replay-ability a weak point since if you completely figure out the 60 people once, it’s easier to discern who was who in another run even years into the future. On the other hand, the presentation, the story and the lore are all-powerful points for the game, especially if you attempt to fill in the blanks between all the deaths.

Overall, The Return of the Obra Dinn was a satisfying experience with a certain uniqueness to it. It has an interesting narrative, delivered cleverly with a deceptively minimal styling that does not reflect its vast content. It was an addictive and enjoyable game and I would highly recommend it.