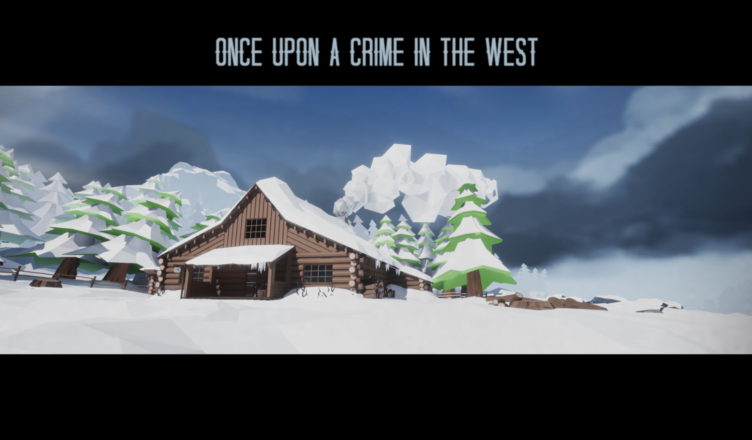 Once Upon a Crime in the West is the third murder-mystery title from National Insecurities, from their earliest proto-type Disorient on the Murder Express in 2016 to the sci-fi themed 2000:1 – A Space Felony in 2017, the team have now produced a new ‘whodunnit’ with a snowy, wild-West theme and setting. For the sake of transparency, let me add that I know members of the team that worked on this game.

The game starts with the player arriving at an isolated, cliffside cabin ‘Mount Inn’. They must then play eaves-dropper, comrade and detective, through the 12 days of Christmas in order to collect enough information to determine why the guests and owner are all dead on the 13th day! Often, the player is required to perform mundane actions in order to progress the dialogue, this ranges from playing the piano (badly in my case) to sweeping the floor and playing an unknown card game.

Whilst there are other indicators in the scenes that play out and in the environment itself, the majority of information is delivered via the dialogue between characters. The writing and the voice acting are the highlights of the game, they are both executed brilliantly and work together to bring the characters to life and add an element of comedy. There are bits of humour dotted throughout the game such as the cabin’s name and a coin being thrown into a jar each time someone swears or curses! Overall, each the characters were distinct and played well, however, the sound quality did seem to be lower for one character, Cameron.

The art in this game is stylistically blocky, it works well in portraying the environment and the combination of this and the setting made it vaguely reminiscent of The Long Dark despite the vastly different genres. All of National Insecurities’ murder mystery games have characters that are mainly a single colour, not unlike a game of Cluedo! While I expect this was originally a design choice made at least in part due to limitations, it suits the game’s genre and the characters have become increasingly detailed in each game.

Once Upon a Crime in the West is a short game and can be played in around an hour or so. It is a relaxing but intriguing narrative experience requiring a minimal amount of interaction. The bulk of the game’s substance is in the scenes that play out and particularly the dialogue. This culminates in the player photographing the characters and pinning pictures to a wall in order to piece the events of the past 12 days together and link the victims to their murderers.

On a technical level, the game runs smoothly, is easy to navigate and has fairly standard controls as default. I ran into some trouble trying to photograph Lachlan and needed to reposition the ‘ca-mehr-a’ and take about 20 pictures before it registered as a usable victim-shot. However, as this was the first issue I had encountered and I did manage to get the photo, it was only a minor annoyance.

Currently, Once Upon a Crime in the West is only available in the Humble Trove as part of a monthly subscription but I have been advised it is ‘coming soon elsewhere’ and hope to see it available as a stand-alone purchase soon. It has a great narrative, great characterisation and is executed a comedic flair that I love and have come to expect from National Insecurities’ games.