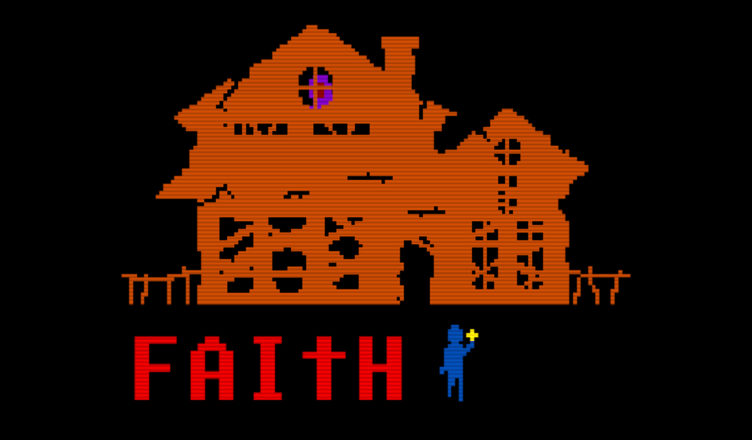 “We stopped checking for monsters under our bed when we realized they were inside us.” – Charles Darwin

Note: I played and am reviewing Faith Chapter One: Deluxe Edition (v1.4) which also includes 5 desktop wallpapers, 5 phone backgrounds, 5 application icons and the game’s OST. However, Faith v1.1.1 is still donationware and can be played on a name your own price basis.

Faith is a pixel graphic horror game with a 1980s setting and distinct retro vibe reminiscent of MS-DOS and Atari games! Originally released in October 2017 by indie developer Airdorf Games, it has since received a hefty update in the form of the Deluxe Edition which released in May 2019 as well as a second chapter. They have now joined forces with New Blood Interactive to further update the game and its upcoming third chapter to release the entire series on PC and consoles as Faith: The Unholy Trinity. The game is set to debut at $9.99 but has no fixed release date as yet, but it is possible to play a demo via the game’s Steam store page.

Faith begins with a micro-tutorial covering the game’s basics, this consists of WASD to move and space to use the characters only possession, a crucifix. Following this, a priestly protagonist pulls over at the side of the road and ventures into the woods. Enemies randomly appear along the way, causing a genuine sense of panic, and while it is not possible to engage in combat of any kind, the player can be killed and must utilise the crucifix to deter approaching monsters.

The game has very specific savepoints meaning that death can be somewhat punishing in terms of travel and repetition, especially since the game’s cutscenes are frustratingly unskippable. Faith Chapter One includes one multistage boss fight in which the tactics are not immediately obvious. This provided a fun challenge that also gave a sense of achievement on completion, but was impacted negatively by the aforementioned repetition after each death.

The game’s narrative is largely horror-based with religious and satanic undertones, reminiscent of The Exorcist. Pieces of textual narration of the protagonist and various events are dotted throughout the game along with letters, observations and other information, some of which must be revealed with the crucifix. Whilst there are no voiceovers or acting in the game, the texts are well written and provide plenty of detail whilst managing to remain an air of mystery in the lead up to one of five possible endings.

Faith’s aesthetics are distinct in their retro feel, pixel art which, despite the apparent simplicity of the style, succeeds in being wholly creepy with some truly unsettling imagery. Similarly, the soundtrack features a number of eerie chiptune tracks, including a version of Beethoven Moonlight Sonata, which compliments the visuals perfectly. Sound effects also take the player right back to 80’s gaming with snippets of distorted, robotic voices, static and other cleverly implemented sound effects.

Overall, Faith’s first chapter will provide around 30-45 minutes of truly disturbing gameplay for a more than reasonable price. The scares vary from rare and impactful jump scares and speedy, panic-inducing enemies to the much more subtle and unsettling horror elements of the narrative. The various elements all work in tandem to produce a game far more unnerving and immersive experience than first impressions might imply and one that I’d definitely recommend to fans of both retro and horror games alike.

If you enjoyed this review you might also like some of our other horror game reviews such as:
Castlevania – Distraint – The Hex