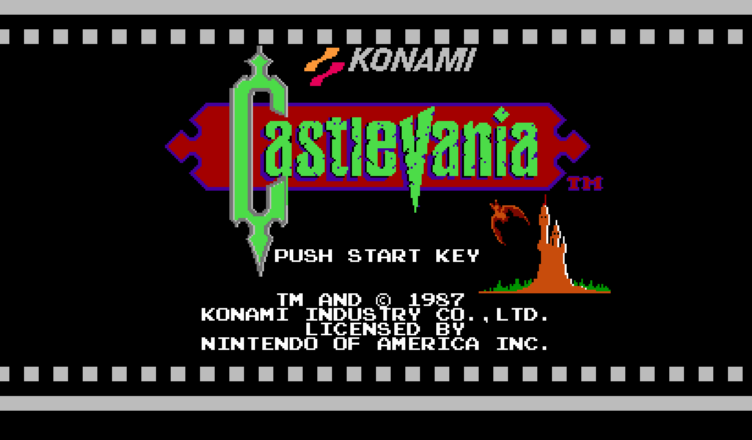 Castlevania is a platformer action-horror game by Konami, originally developed for several consoles. This review covers the Nintendo Entertainment System version. The game is definitely not one of the easier ones on the classic console, with unpredictable enemies, stingy health management, and difficult platforming. This is offset by the fact that you are allowed to continue for as many times as you desire.

You play as Simon Belmont, who must take down the Count of the castle along with his other henchmen, all inspired by classic horror literature like Frankenstein. He must go through the castle’s 18 stages, each three representing a level and ending with a boss. On his way, he can collect items which help him with fending off the game’s worst of the undead.

Unlike what you would expect from a regular metroidvania game, Castlevania is a linear platformer, where you move from start to end. Your only available upgrades turn Simon’s leather whip into a more powerful chain whip, and then into a longer morning star – all these upgrades are lost upon losing a life and must be obtained again. There are also no tools that allow you access to areas previously inaccessible,
differentiating them from typical metroidvania games.

Castlevania has all the hallmarks of a Nintendo Hard game. You’ll find enemies that spawn randomly and move erratically, getting hit by enemies results in knockback which may send you falling into water or a bottomless pit. As well, you’ll meet enemies that are tough by their very nature. And as you progress further, the enemies deal more damage and are harder to deal with. If one removed the hunchbacks and the flying medusa heads, the game could be a hell of a lot easier! The bosses, especially from Stage 9 onwards, are no easy task, and you will spend several tries working out how to defeat them without being killed yourself.

Despite my advances in the game, in the face of all setbacks I had with the stages I’ve crossed so far, I’ve yet to advance past Stage 15. I once made it this far without using a continue, but my future priorities would be to use as many continues as possible to see the last three stages of the game. Suffice to say, the one reliable way to get further into the game is to practice. There are also tons of hidden secrets, which can provide you with items such as the Fire Bomb (which looks like Holy Water to be honest), meat which restores 7 bars of your health, or moneybags which add to your score and bring you closer to getting an extra life on top of the extra three you begin with.

The graphics are impressive by NES standards, considering how much detail is present in the game’s levels. Each level is as visually distinct and equally as decrepit as the last. The boss rooms after the first boss get their own details as well. However, do expect the game to flicker, especially when a lot of action is ongoing.

The music is even more impressive. Each stage has its special music track, beginning with the series’ iconic track, Vampire Killer. The Stage 7-9 and Stage 13-15 tracks, Wicked Child and Heart of Fire respectively, have quickly become one of my favorite NES tracks for their pacing and mood.

Castlevania for the NES is not an easy ride, and I have yet to make it to the final stretches of the game, despite being given unlimited continues. The music is one of the best you can hear the retro system play. If you wish to take on the game, then good luck! You’ll need it.