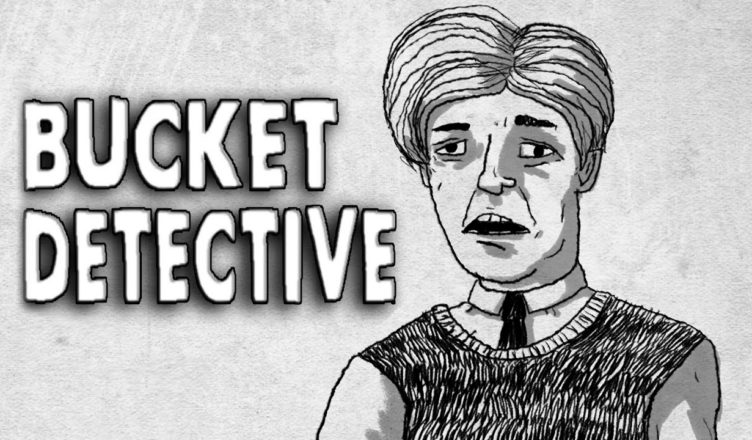 “The victim of mind-manipulation does not know that he is a victim. To him the walls of his prison are invisible, and he believes himself to be free. (…) His servitude is strictly objective.” – Aldous Huxley

NOTE: This game references a variety of NSFW and other sensitive subject matter which may be reflected in this review.

Bucket Detective is a short yet disturbing horror game by Jesse Barksdale, creator of The Static Speaks My Name. It is an unsettling narrative experience with a variety of moral dilemmas for the player to face, the combinations of which produce multiple endings. The game can be completed in its entirety in a little over an hour but still manages to pack a punch and has the ability to leave players feeling anything from confused and amused to downright offended.

The game starts and almost instantly induces uncomfortable feelings as the protagonist, David Davids, is revealed to be an abusive, narcissistic pervert. He is trying to write a book called Bucket Detective with little success and in desperation ends up visiting a strange building in which he can choose to help a cult complete a dark ritual in exchange for divine inspiration.

The narrative takes some strange turns and has the player completing a variety of bizarre and increasingly questionable actions such as self-mutilation, stripping and finding spoons; there is even a Steam achievement for carelessly throwing a baby around! Things get increasingly ominous as David’s story is revealed, along with information about side characters such as the cult leaders and the building’s guide, with tales of assault, brainwashing, imprisonment and worse. Bucket Detective describes itself as a comedy-horror but it’s an awkward combination of sensitive and potentially triggering subject matter and sporadic attempts at humour which is often difficult to laugh at and even feels distasteful at times.

The game adopts a distinctive black and white, sketchy cartoon art style for its cutscenes that works to downplay the seriousness of the narrative elements to a degree, adding an air of silliness to the violence for example. For the interactive sections of the game, a 3D aesthetic is implemented with simple models and textures, deliberately repetitive in-game objects and references to the developer’s previous titles.

The narration in the game is unique and bizarre with the story being delivered in by a robotic voice speaking in an overly simple, broken, and incorrect language which seems like a further attempt to distance the player from their abhorrent deeds and the unpleasantly provocative undertones of the narrative as a whole. In contrast, the music is unobtrusive and ambient for the most part but does amp up and help to build drama in the game’s more intense moments.

Bucket Detective operates like a walking simulator, with the player exploring the cult building and following, or not following, a series of instructions. There are a couple of basic (pseudo) puzzles but the majority of the choice points stem from where the player goes and when, and sometimes with which objects. The controls are standard (WASD, E and mouse buttons), intuitive and well implemented, the game as a whole seems technically polished and ran smoothly.

Alongside the cartoon artwork, the game’s multiple endings are its best feature. There are five main conclusions with some even having multiple iterations. Each one provides the player with a unique cutscene that wraps up the events within the building but also shows the player the future, revealing their long term effects on David and his life.

Bucket Detective is certainly a unique experience but it is also not for everyone. The artwork is inappropriately cute and the narrative is thought-provoking but the combination of elements make the complete experience really quite sinister. Overall, it is an enjoyable but troubling and confusing experience that requires minimal investment in terms of either time or money that I’d very cautiously recommend it to anyone not of an overly sensitive disposition.

For other weird, wonderful and potentially NSFW game reviews why not check out:
The Good Time Garden – Lust From Beyond – Don’t Make Love