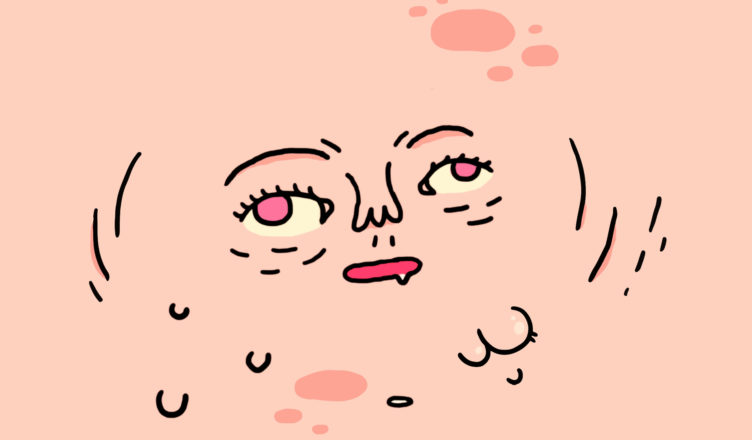 “Consider the subtleness of the sea; how its most dreaded creatures glide under water, unapparent for the most part, and treacherously hidden beneath the loveliest tints of azure.” – Herman Melville

Note: The Good Time Garden contains cartoon nudity and mature language and is not intended for younger audiences.

The Good Time Garden is a short but unique experience created by James Carbutt and Will Todd (Coal Supper), it features beautifully bizarre hand-drawn animations and a deceptively dark narrative. In what feels a bit like a playable episode of Salad Fingers, the nude protagonist can traverse a fleshy pink environment, encountering a number of weird and wonderful (also naked) characters along the way.

Mechanically, the game is very straightforward and utilises just WASD plus N (water), M (pick up) and the space bar (slap) for the controls. While this works well enough and the game runs smoothly, the input keys are a little unorthodox and cannot be changed as the game has no menu or setting options.

After meeting a character best described as looking like a sentient testicle, it becomes clear that it wants to be fed. The bulk of the gameplay consists of exploring the throbbing world in search of items (and other creatures) to satiate this new friend, resulting in further crazy encounters.

With its simple cartoon art style, pleasant pastel colour palette and calming music, The Good Time Garden appears quite cute on the surface. However, a closer look reveals the crude nature of the drawings and the sinister nature of the player’s actions.

There are disturbing undertones to every element of the game, from the unsettling way in which the characters and environment move to the creepy dialogue and voices of the various characters. The game as a whole, but particularly the surprisingly comprehensive narrative, is much darker than first impressions might suggest.

The Good Time Garden is a surprising game in all the right (though also very wrong) ways, masterfully juxtaposing lighter elements and immature humour with the darker connotations of the narrative and the crude illustrations to create an entertaining and full experience. It will provide around 20 eccentric minutes of playtime, making it a short but highly recommendable title, especially at zero cost!

If you enjoyed this review you may also like to read about some other free games:
Kyle is Famous – Birdgut – Thing in Itself