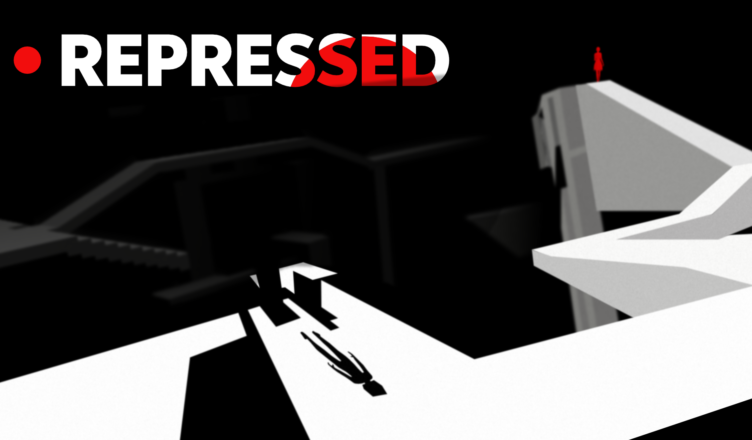 “This life, which had been the tomb of his virtue and of his honour, is but a walking shadow; a poor player, that struts and frets his hour upon the stage, and then is heard no more: it is a tale told by an idiot, full of sound and fury, signifying nothing.” – William Shakespeare

Repressed is a short, experimental puzzle game, divided into separate chapters, in which you play as a shadow. It takes place within the protagonist’s mind and the player must navigate the stark labyrinth via cookie crumb style memories and sporadic narration. It has a dark undertone and also features a broader narrative and storyline intended to complement the unusual concept and mechanics.

Repressed offers some truly unusual mechanics and gameplay, the seemingly simple fact that the player is a shadow completely upends regular movement and expectations and was somewhat disorienting at first. The game’s increasingly challenging puzzles really take advantage of this, using light and perspective to create unique and satisfying obstacles that blend well into the environment. Different mechanics and problem-solving techniques are gradually introduced and all make good use of the ‘shadow physics’ and really add to the gameplay.

A number of puzzles and general navigation often require the player to traverse to different areas by utilising the various mechanics and avoiding things such as crumbling floors. As such, despite the inability to jump in the game, I would describe it as having traits of the platformer genre in addition to the adventure and puzzle game elements that it includes.

The game’s developers also boast on the game’s web page that it offers ‘A deep story that answers difficult questions [… and …] illustrates in a symbolic way how we fight our inner demons, why we continuously repeat our mistakes and why we keep failing to achieve certain goals in our lives‘ and while I was initially intrigued to see how this would play out, it left me disappointed.

The ‘story’ was delivered mainly via narration, triggered by finding memories, but even overlooking the broken English and slightly stunted delivery, it felt shoe-horned into the game. The bulk of the narrative was overly vague, pseudo-philosophical and at it’s worst felt like being spoon-fed something unwanted and superfluous. It was jarring at times, ruining the immersion, and seemed like a crutch; the gameplay itself is very clever and could have been used to convey a narrative without resorting to tired techniques and bad writing.

Repressed has a minimalistic, stylised aesthetic in a limited greyscale palette with touches of red to represent memories. This not only looks nice but works well with the other aspects of the game and adds to the gameplay itself, particularly in keeping the shadows clean and ensuring puzzles aren’t unintentionally frustrating.

The music is minimal but quite atmospheric, it adds to the overall feel without distracting the player or becoming overbearing and repetitive. The memories do not include sound effects and most of the information comes from the visual element and the narration but there are a couple that has specific music attached to them.

Overall, Repressed is a very mixed bag. The elements of the game that it does well, such as the unusual concept, the puzzles and the mechanics, even the complimentary visuals, are great and bring something new to the genre. However, I personally believe that these things could have been used really effectively to communicate a narrative to the player in a much more satisfying way. As it stands, the story element of the game detracts from the experience for me and I’d even go so far as to say it felt lazy and is detrimental to a title that could potentially have been a ground-breaking little puzzle game.

I did enjoy the problem-solving aspects of the game, but it has a number of flaws and tries too hard to be more than it needs to be. As such, I can’t recommend the game at full price but would suggest picking it up on sale if you’re a fan of puzzle-platformers as it does still have something to offer!

Still on the lookout for interesting puzzle and platformer games? We highly recommend both The Sojourn and GRIS!