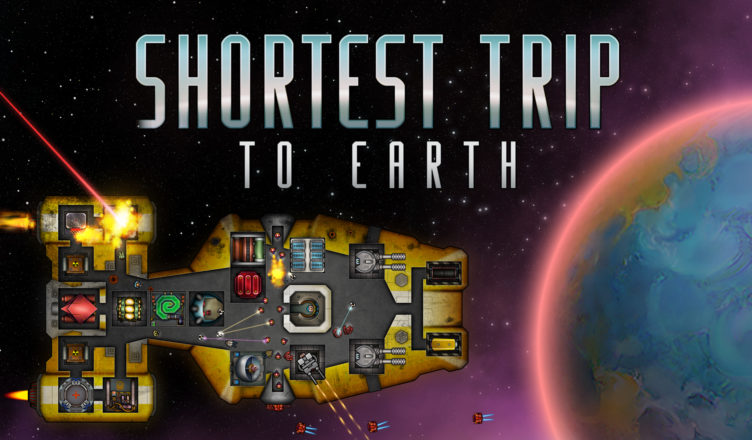 “Perhaps, as some wit remarked, the best proof that there is intelligent life in outer space is the fact it hasn’t come here.” Arthur C. Clarke

Shortest Trip to Earth is a new roguelike spaceship simulator from Interactive Fate. It focuses on exploration, ship management and tactical, real-time battles, drawing inspiration from Faster than Light (FTL) and Firefly. The game was released as an early access title on Steam in October 2018 after over five years of development and is set to release in full tomorrow (15th August 2019).

Let me preface this review by explaining that I am fairly new to roguelikes and management games and as such will be writing from the perspective of an inexperienced noob. Despite being generally more drawn to puzzle games, walking simulators and RPGs, the game’s sci-fi theme and humour, as well as it’s art style, piqued my interest; I approached the game with an open mind and expectations of death. If you’re looking for an in-depth explanation of mechanics and tactical advice from a veteran player of the genre . . . this isn’t it!

In addition to a tutorial that I definitely needed, the game has two modes, challenging and hardcore. In the former, when the ship’s HP is gone, it loses max HP instead of simply dying, it also allows the player to pause the game by pressing the space bar. While playing in hardcore mode, the space bar merely activates slow-motion and the game ends when the ship reaches zero HP. There is also a note when selecting ships stating that ‘Not all ships guarantee a chance of success’ suggesting that it might be impossible to complete the game with certain ships.

While the UI was initially a little overwhelming, it was fairly intuitive and the tutorial demonstrated the basics well. There is definite depth to the game as well as tactical intricacies but it has a gentle learning curve as well as an in-game help section covering the rudiments of various aspects of the game making it easy to start playing. With regards to the UI, there is a lot to keep track of and the developers recommend playing with a monitor at least 23″ wide to ensure that the UI fits comfortably on screen.

Whilst Shortest Trip to Earth wears its inspiration proudly, with undeniable similarities to FTL, even at a glance, it definitely does enough to set itself apart from other titles and stand out. The game has a lot to offer and boasts the following key features:

The aim of the game is to return to Earth, this is achieved by traversing a procedurally generated universe consisting of ten sectors, which in turn consist of various stars, planets, ships and creatures. Each sector has a dominant species, such as rats, pirates or insectoids, and contain a variety of different encounters and scenarios, some of which were highly unique and unexpected.

The encounters were well written (bar a few spelling mistakes), immersive and a highlight of the game; however, I did experience multiple instances of repetition as early as my second playthrough. Likewise, the elements of humour and the characterisation of the crewmembers, with names, thoughts, histories and skills, really add to the game as a whole and elevated it above my (possibly misguided) expectations. The inclusion of a cat crewmember helped!

Aesthetically, Shortest Trip to Earth has a colourful, 2D, cartoon-like style with more impressionistic, static images during dialogue and exploration. Despite the wealth of information on the screen, the visuals are kept clean, clear and relatively easy to read. The audio was fairly simple, the sound effects were well implemented and helped keep track of what was going on during battles but the music mostly amounted to background noise and didn’t really add much.

Despite approaching the game optimistically, I enjoyed Shortest Trip to Earth more than I thought I would. I spent around 12 hours playing, with increasingly successful runs. The most recent ended shortly after I decided I was doing OK. My success levels rapidly declined toward the latter half of sector four and I found my ship almost stranded by the exit gate with minimal organics (food), no metal for repairs and no warp drive for escape or exploration and forced into combat with two enemy ships. The thirteen crewmembers, one drone and beloved cat all went down with the ship – RIP.

I thoroughly enjoyed the game, it was accessible but challenging. The narrative elements and characterisation add an extra layer to an otherwise fairly mechanical game and solidifies it as a unique and memorable experience that I’d happily recommend to fans of the genre and newcomers alike.

If you enjoyed this, be sure to check out our other indie game reviews here!