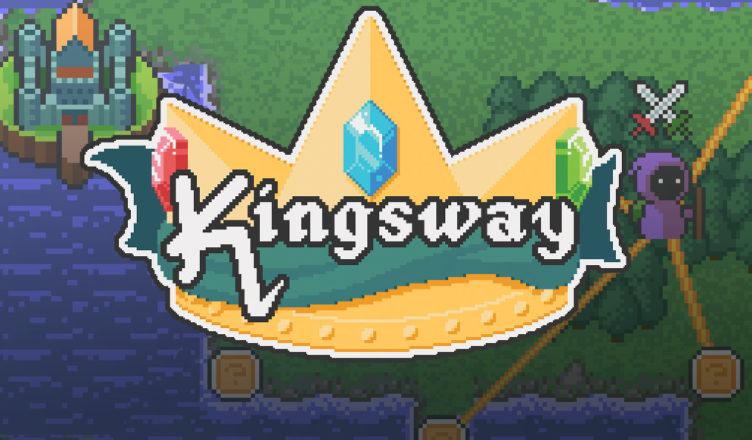 Kingsway is a procedural, fantasy RPG with permadeath by Andrew Morrish and published by adult swim. Unlike other games of its kind, Kingsway offers a very interesting and quirky unique selling point: the entire game acts as an operating system. When you launch the game, you are presented with a “character” login screen, and once signed in, you will see a desktop reminiscent of Windows 2000. Although the options available for it are limited, you can personalize the system if you choose to!

Each element of the operating system represents different aspects of the game. For example, the My Bag desktop icon opens an application displaying your character’s belonging, the World Navigator program shows you the world or dungeon you’re traversing, the clock on the taskbar tells you the time and day in the world, and so on.

The game makes full use of its nature as an operating system. As you can see in the above image, your character’s status is shown in a window, the quest “emails” are read through a completely different window, and the world navigation takes place in another. That’s without mentioning the minimized Music application, which can play the game’s built-in music in the background. When you move to one of the yellow markers in World Navigator, a window will pop up showing a progress bar until you arrive. Enemy encounters take place in even more windows (one window per enemy) and they present… their own kind of challenge.

Almost all enemy windows automatically move around. Fights are based on progress bars, so whenever you use a skill, you wait until the progress bar is filled up and then use another skill, and it’s the same for enemies. As such, the fighting system encourages you to be efficient by getting in more hits than your enemy and blocking when the enemy almost fills up their bar, and this efficiency can only be achieved by repeatedly clicking on moving buttons! I believe that can affect your enjoyment of the game, as the potential for misclicks is high, making it very possible for an unnecessary window to be focused and hide the enemy window. In addition, I advise you to take it easy with the clicking; only after I played the game for two hours that I realized my arm was sore.

In addition to enemies, there are also traps, which you can avoid by noticing the pop ups that appear and clicking the AVOID button on them as soon as possible. Trap popups move even faster than enemies; you don’t want to be struck by a poisonous arrow!

You always start in a randomly generated world, all of which possess abandoned houses, manors, villages, dungeons, random encounters with people, and more. Kingsway encourages you to explore as much of it as you can, but it makes sure you can’t just explore everything: the more time you spend, the more the Sky Eater, represented as a huge shadow with tentacles along its edge, will loom over the world, forcing you to always stay on the move and not waste time. Thankfully, time is always paused when you aren’t moving or fighting.

Death is permanent in the game, and aside from passing one item to your next character (by burying your dead character), nothing carries over to the following games. You must learn what you should and shouldn’t do in each game attempt. However, you can get gems at the end of your runs and spend them on unlocking starting items or hotkeys which can help greatly with the windows, such as Tab for switching windows or a button to close all closeable windows.

If you have no issues with clicking on moving windows and the misclicks that entail, you will love Kingsway for its quirky nature as an operating system slash fantasy RPG. There are many little details that computer enthusiasts would love, plus the way the game is played is innovative, even if it can be frustrating.