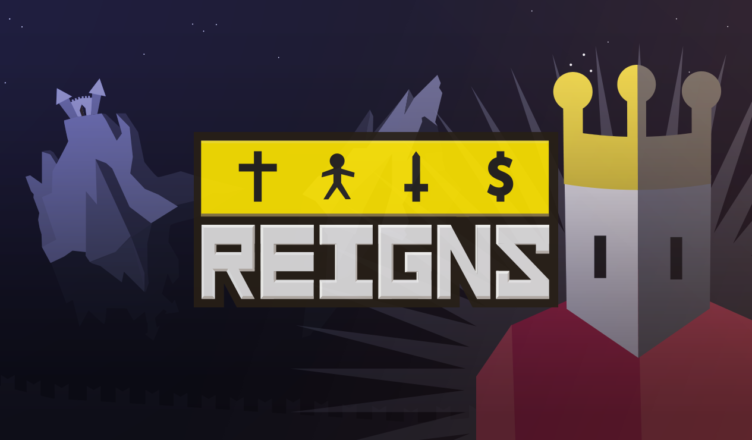 Reigns is a card-based game by Nerial, in which your goal as a series of different yet connected Kings is to live as long as possible. It is a game that excels in being both simple and complex through its clever usage of cards.

Rather than being presented with the dense interfaces and screens of management simulators, Reigns only lets you deal with one issue at a time with either a positive or a negative response, simply by swiping. In turn, each decision you make affects any of four major sects of the land: Religion, People, Military and Economy. You must never let any of the sects deplete or fill to the maximum, or the King will die – in one of 29 different ways! When your King dies, he will be replaced by the next in line.

The game has a lot of variety, though sometimes repetitive with how it plays its cards – it might take you a while before you can unlock and see new cards, which is done by recruiting people to your court. Cards having only two decisions also prevent you from finding creative solutions to some problems besides the ones you’re given. That means if you play the game for a length of time, you will learn which decisions are smart and have an easier time as King. That doesn’t make Reigns any less unforgiving, as a bad string of luck can quickly deplete one of the sects before you know it. Some rare events let you gain useful powers, such as a barn to prevent famine or fortifications to ward off invading armies.

The game includes a lot to be discovered, including 45 Royal Deeds which are long-term tasks, 38 characters to meet and 29 deaths. Over 600 cards are waiting to be discovered, too! There are also special events that include dungeon exploration and fighting. The only two things stopping you from finding them all are what the game gives you and what you do.

Visually speaking, the game is minimal with its art style, yet manages to make great use of expressions and shading (as well as vocals), making each card feel alive and have an impact. The art style also manages to portray the brutality of violent deaths well without graphic depictions, which is helped further by each death’s audio bites. The music does a good job of settling you into the regal and mysterious world of Reigns, though it is unmemorable outside of the game.

Reigns, though repetitive a lot of times, has a lot to offer with only swiping cards or left or right. A simple game with complex mechanics, it is perfect to play for short bursts on a commute. The job of the King is never easy, and you can’t be too nice, or too cruel for that matter.

Interested in trying out the game? You have a chance to win Steam keys of both the original Reigns and Reigns: Her Majesty! Simply join our Discord server and respond to the competition announcement! The winner will be chosen on Friday 20th of March!

Interested in other good games for your commute? Take a look at those!
Pocket City – Antiyoy – Final Freeway 2R – Dreamo