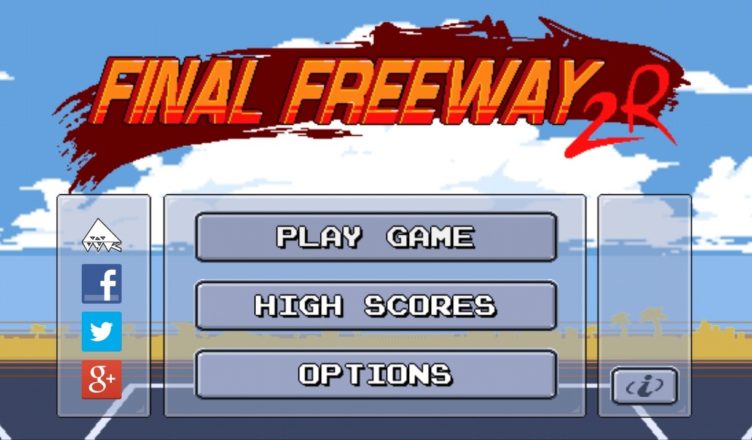 Available on Google Play, Final Freeway 2R is a pocket take on the arcade classic Outrun. Developed by OYK Games, you can grab the game free of charge with ads, or grab the paid, ad-less version for $0.99. Both have the same amount of content.

You can play as one of three racers: Tess, Rico or Kate. When it comes to driving Tess is average, Rico has the best strength but weakest handling, while Kate has the reverse of Rico. You take the helm of one car, which is available in red, blue or black. You have three difficulties: Beginner, Normal and Expert, which changes the amount of time you start with (at least that’s what I noticed). You can play to the tune of three music tracks that do a terrific job of capturing the vibes that make Outrun great.

To control your car to victory, you are given a plethora of control options to choose from. Some involve tilting, some involve steering with a virtual steering wheel on either side of the screen, and one involves steering using either side of the screen. Some control choices have auto-acceleration and some have manual acceleration, but all will give you a way to hit the brakes. On top of this, you can play with a controller if you desire. In total, that’s seven control choices to choose from. Granted there isn’t a choice to build your own control scheme, but the game does a good job of catering to the different ways people would play a racing game on mobile.

You drive your wheels across 5 of 13 colorful and varied locales that you can explore per run. The locales are complimented by the retro 2D graphics that make up the world. You must weave through the traffic while also making sure your opponent doesn’t beat you to the next checkpoint first (or worse, drive you off the road). You must make it to the next checkpoint under a strict time limit reminiscent of Outrun – once the timer hits zero, your car cannot accelerate unless you manage to make it past the checkpoint. Should you finish or the timer run outs, you will be shown the areas you drove through, your final score will be calculated, and you will input your three-letter initials to the high-score screen if needed, which strangely mixes scores from across all three difficulties into one screen, rather than separate them into three tables.

All of this serves to create a pocket-sized version of Outrun that oozes of the same charm. Yet, I think the game is short with an average complete run taking anywhere from four to five minutes. There aren’t that many locales to explore or other cars to play with. You might end up seeing everything the game has to offer in less than an hour. Not to mention that thanks to no drifting, the game is easier than modern Outrun games.

While I think it is short and easy, Final Freeway 2R is still an experience I adore, with the right visuals, gameplay and music complimenting each other. I recommend setting down $0.99 for the premium version. If not, you can always download the free ad-supported version to play or try it.