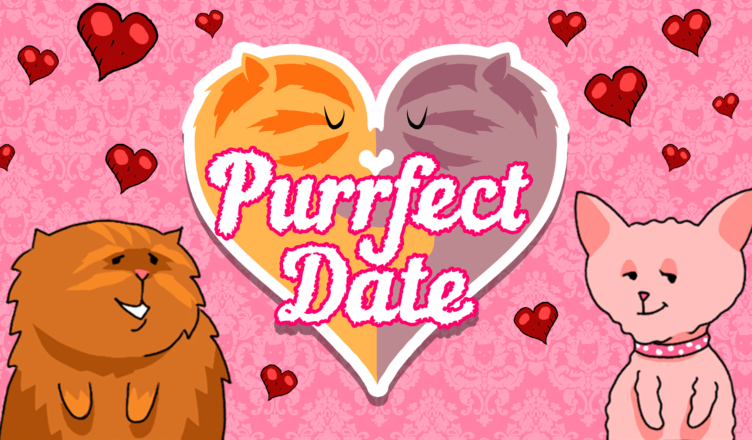 According to the game’s webpage, Purrfect Date ‘is a cross between a visual novel, a dating sim, and a dark British comedy‘. It is set on Cat Island, where the player sequentially takes on the roles of six keen, new research assistants, each granted eight days stay for romance and reconnaissance!

It was created, for the most part, by developer duo, Bae Team, and published by Bossa Studios. It touches lightly on some mature themes, as expected for a dating sim, but overall, it is light-hearted, cute and silly.

As each new research assistant arrives on the island, they meet the island’s handful of human inhabitants, have their scientific role explained to them and find out that half of the island can cause adverse effects and is largely unresearched. The following morning the player meets some of the island’s feline residents (whilst this process gets shorter with each researcher/chapter, it does get a little repetitive). There are also a number of ‘Pony-Island-esque’, glitchy graphics moments that hint at a possible darker sub-plot very early on!

After the initial introduction, each research assistant can decide how much time to spend on which activities. However, the player must complete the research in order to unlock the next chapter, and some amount of recon is required to unlock the third piece of research. Beyond this, any further recon or romance is entirely player choice, however, four dates are required to unlock the third recon task. As such playtime is varied and could easily range from 3-10 hours depending on the style of play and level of completion.

The activity choices make up the bulk of the interactivity and Purrfect Date is definitely a visual novel first and foremost, even dialogue options are limited and the game involves a lot of reading. Despite a slow start, a larger story begins to reveal itself part-way into chapter two and the game as a whole gets much more interesting.

The game’s cute, cartoon aesthetic is one of its highlights, really giving Purrfect Date some character. This is especially prominent for the game’s UI, with background scenes and images having a slightly sketchier style. The UI is very straightforward and the controls consist of clicking a mouse or keyboard button (on PC), or touchscreen (iOS).

The game has no voice acting, and not much in the way of sound effects. The music is also quite minimal, and while it also fits the cute styling of the game, it can start to fade to background noise, or worse – it doesn’t and starts to feel incessant and repetitive.

Overall, Purrfect Date was a silly but fun experience. The larger narrative added some substance, elevating it (somewhat) beyond dating sim clichés and cat tropes! It’s styling fit well with its themes, though the visual aesthetics were infinitely stronger than the audio. It has a relatively short playtime, but different endings and activity choices also provide some replayability. Despite this, the £7.19 price tag still feels a bit steep and as such, I would only recommend this at a slight discount or if you just really like the idea of digitally dating a cat!

If you enjoyed this review and would like to check out other animal-related romances, why not read our review of Don’t Make Love – a mantis dating sim!