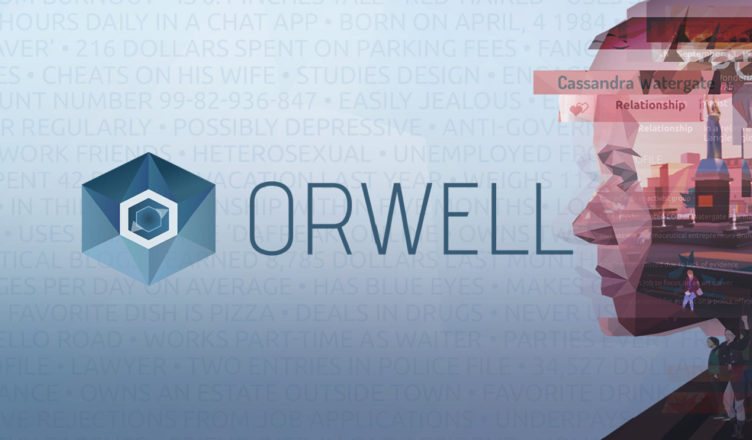 “Reality exists in the human mind, and nowhere else.” – George Orwell, 1984

Orwell is a dystopian point-and-click game that was released in late 2016 with its sequel, Orwell: Ignorance is Strength following two years later. Both Orwell games are politically themed and consist largely of trawling through websites, personal files and communications to find information about people of interest following a terrorist attack. As more is revealed, characters become targets, allowing details specific to them to be extracted to their profiles.

Using a system called ‘Orwell’ the player must act as big brother in their role as investigator, overseeing all and passing on choice ‘data-chunks’ to an evaluator who will then use these to draw conclusions. The information supplied and withheld will control the narrative and affect the paths different characters take – after playing both multiple times I can confirm that choices do matter.

I also noted that both games feature a cheeky, but somewhat meta, newsletter sign-up form where you are prompted to enter your genuine email address (optional) as part of the in-game profile creator. I’ll admit I thought this was an interesting touch for a game about surveillance and use of data.

Orwell and its sequel are both largely text-based. The majority of the information is provided in written form with a few pictures dotted throughout. Be especially prepared to do a lot of reading if you want to experience the first instalment of the game fully as there are no voiceovers, however, some average voice acting is added in Orwell: Ignorance is Strength.

Both games are written well, with clear characterisation and varying styles depending on the format of the information, such as, whether it is a casual e-mail or a news article. Information is provided clearly and relatively succinctly. In the first instalment, chapter one holds the player’s hand a little, whereas Orwell: Ignorance is Strength bombards the player with information from the start which felt somewhat overwhelming.

Both games have well-constructed narratives, but I found that Orwell did a better job of keeping me interested and wanting to dig further. Orwell: Ignorance is Strength, whilst enjoyable, did not live up to its predecessor in terms of depth of story or characters. However, the references to the first game and the choices made whilst playing it were a novel addition and reminder of the overlapping timelines of both games.

Orwell parts one and two have a simple but effective soundtrack, it is subtle and seems to fade almost to white noise for a lot of the game but becomes more noticeable when dramatic details are discovered or when there is a pertinent choice to be made and adds a little to the atmosphere.

Orwell: Ignorance is Strength adds an extra tool or mechanic in the final chapter of the game – the influencer. This allows the player to construct narratives based on the information they retrieve and push this out onto social media. While this is an interesting touch, it would have been better if it had been introduced earlier in the game and does not serve to make up for the disappointing narrative. It wasn’t bad but felt lacklustre after the creativity and depth of the narrative in the first Orwell game.

The art style and UI are similar in that they are understated but utilised really effectively in both games. The images are blocky and somewhat impressionist, especially those of people, but, with a few interesting looking exceptions, they manage to feel authentic rather than abstract.

Overall, Orwell was a fairly unique experience, with perhaps some similarities to visual novels and point-and-click puzzle games such as What Never Was. It is well made and combines narrative and gameplay to keep the player intrigued and eager to find out more. It also seems to have plenty of replay value with a number of different paths and outcomes available depending on the choices you make. Whilst the same can be said of Orwell: Ignorance is Strength it doesn’t quite pack the same punch. The second instalment is shorter, has less variety in terms of proceedings and outcomes and the narrative is not as well written or constructed.

In short, if you’re looking for a slow-paced, thought-provoking game with a political theme (and don’t mind 4-6 hours of reading) I’d definitely recommend Orwell but maybe give Orwell: Ignorance is Strength a miss, or approach it with lower expectations.

One thought on “Orwell Parts 1 and 2 – A Comparative Review”