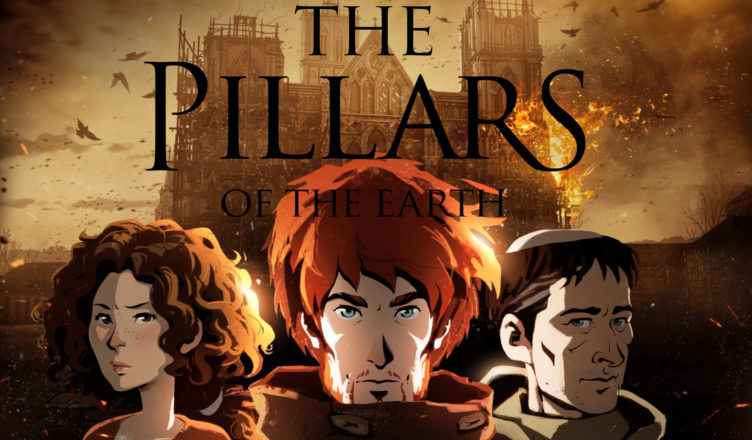 “The most expensive part of building is the mistakes.” – Ken Follett

Note: Ken Follet’s Pillars of the Earth has a PEGI 16 rating and this review may reflect that.

The Pillars of the Earth is a 2D point-and-click adventure and interactive fiction based on Ken Follet’s best-selling novel of the same name. The game takes place during a time of war, in a poverty-stricken 12th century England with the story focusing on the fictional town of Kingsbridge as it endeavours to assure wealth and security for its people with the construction of a new Cathedral.

Released in sections, the game is comprised of three books, each with seven sections in which players follow a nonlinear storyline and adopt the roles of three main protagonists as well as two additional playable characters. Despite being a genre the studio is well known for, it was without a doubt Daedalic Entertainment’s most ambitious project to date.

Originally published in 1989, the game’s source material has sold over 27 million copies and is undeniably popular. The Pillars of the Earth stays true to Ken Follet’s original narrative whilst also implementing an element of autonomy, interactivity and instrumental choices to the experience. Matt Kempke and Kevin Mentz, who both worked on the project explained, “We took the source material completely apart and reassembled it as a unique experience for the player. We kept the core story but of course, a game gives us more freedom to add decision-making and interaction.”

The Pillars of the Earth features some beautiful artwork, especially the two hundred handpainted backgrounds that provide the setting for each scene. They are clearly a labour of love and add an extra layer of ambience to the game as a whole. The in-game music comprises of a full orchestral soundtrack by the FILMharmonic Orchestra, Prague, the music is largely non-diegetic but is very atmospheric and fitting for the time period.

Despite the numerous positive facets of Ken Follet’s The Pillars of the Earth, there is a certain clunkiness that is all too familiar to players of Daedalic Entertainment’s previous 2D point-and-click games such as their Deponia titles or the Edna and Harvey series. There are technical issues, such as ill-timed save points and loading times making transitions between cut-scenes and play labouriously slow, exaggerating the already stunted feel afforded by the unnecessary character voiceovers and interjections; yet there are also deeper and more detrimental issues within the gameplay as a whole.

The main issue with The Pillars of the Earth (and other Daedalic titles) is the linear way in which the gameplay is designed, despite the premise of freedom and decision making. So-called puzzles that could easily be solved with logic are rendered frustratingly confusing by irrelevant but necessary actions such as having to click on a certain item first in order to then interact with something else in the way you want. As a result, sections of the game that should be intriguing and challenging in a fun way, become nothing more than mindless clicking exercises.

Overall, Ken Follet’s The Pillars of the Earth is a rich, authentic, narrative experience with highly complementary aesthetics and soundtrack. However, the recurring issues with Daedalic’s attempts at point-and-click mechanics and puzzles mean that it is also somewhat painstaking and much longer than it needs to be.

As such, playing the game is a bit of a commitment and I would only recommend the game cautiously to fans of historical literature and interactive novels, and even then with the proviso that it doesn’t warrant the RRP and waiting for a sale would be advisable!

If you enjoyed this review you may also enjoy historical first-person exploration game Brukel or the more succinct point-and-click game Kyle is Famous!