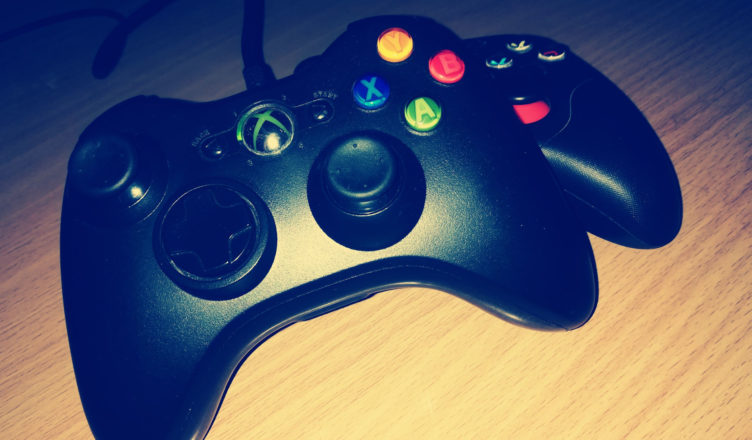 When I started playing games, I was a console person. SEGA Genesis, the original PlayStation, and the PS2 were pretty much my beginnings, sprinkled with a couple of PC games here and there. But for years, I have been playing on my computer with the keyboard and mouse with little change. After buying two controllers (a Bluetooth one for my Android phone that also works with Windows, and an Xbox 360 wired version) and using them whenever possible, I have to say they’re interesting and I’ve been missing out on a ton.

They’re not without their faults. For one, the X360 controller uses an 8-directional “disc” d-pad instead of the traditional 4-way cross pad. The problem with the disc-style pad was that I could be holding left-up when I meant to press only left, which was bad for games like Celeste and caused me to make more mistakes. When I switched to my phone controller which has a cross d-pad, I made fewer mistakes. Also, the analog sticks require getting used to them in some first-person games such as Minecraft, especially because getting the sticks to move halfway and register is easier said than done.

Some games feel more natural with a controller than with a keyboard and mouse. Genres that rely on combos like hack n’ slash or fighting become much more manageable, as the buttons are fewer, easier to memorize, and positioned around where your hands hold the controller rather than spread out on the keyboard. Racing and driving games benefit from the trigger shoulder buttons, which can be fully held to achieve full speed but also held partway to maintain a fairly moderate speed, without the frankly annoying ritual of accelerating and letting go repeatedly to keep your velocity.

Of the features I didn’t know I missed; rumble was one of them. I like the violent jolts of the controller when firing machine guns, bumping into dangerous obstacles, or when a quake or rumble is happening in-game. It may seem insignificant in the grand scheme of things, but it’s the *feeling* of the vibration that gets me immersed into the game far more than photorealistic graphics ever could. There is also the portability factor. I could hook up several controllers to one device and hand them to several friends easily for a nice multiplayer game.

There are some areas where controllers aren’t as good as the keyboard and mouse combo. The mouse alone makes first-person shooters a lot easier to aim in and feels more natural. Keyboards have a range of buttons, which makes hotkeys and quick inventory binds possible. However, it is much harder to remember the keyboard binds for a game I haven’t played in a while, and they’re almost always lying on a desk rather than in your hands.

Overall, I’m happy about relearning how to use a controller and will keep playing games using them whenever possible. The keyboard and mouse are ultimately superior in a lot of ways, but the controller is just as welcome, with its simplicity, ease of picking up, and specialized features such as triggers.

Interested in other opinions and thoughts? We’ve got a few!
Things I Dislike In Games – Device Price Wars – Google Play’s Search is Useless