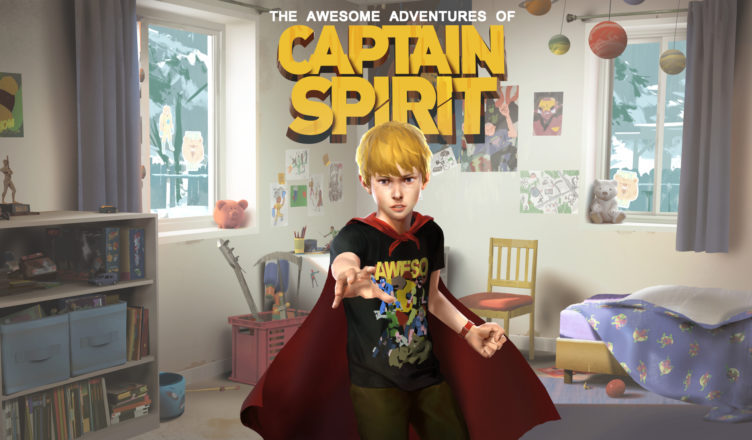 With the release of Life is Strange 2‘s final chapter less than a month away it seemed appropriate to take a look at The Awesome Adventures of Captain Spirit. Whilst not quite a prequel, the game is set in the same universe and gives the player their first glimpse of the bigger game’s protagonists and a few of the side characters. Additionally, choices made in Captain Spirit have relevance later and the save file will be loaded when starting chapter two of Life is Strange 2.

The Awesome Adventures of Captain Spirit adopts the same gameplay and styling as the rest of the Life is Strange franchise with a mix of walking-simulator and point-and-click mechanics with a heavy focus on narrative. It’s worth noting that the game’s story tackles some heavy themes, such as alcoholism and neglect, which accounts for its PEGI 18 rating.

The player takes on the role of Chris, an imaginative 9-year-old boy living with his dad. Things aren’t exactly idyllic and Chris escapes reality by indulging in the adventures of his superhero alter-ego, Captain Spirit. The game’s setting is relatively small, comprising of Chris’ house and garden but there is still a fair amount of content and about 2-3 hours of playtime.

Captain Spirit has a number of objectives to complete, including creating a superhero costume, in addition to the usual items and people to interact with. As the player completes these actions, the character’s situation and the underlying narrative are gradually revealed, along with the game’s emotive nature.

Aesthetically, The Awesome Adventures of Captain Spirit is very similar to previous Life is Strange games. This is true both in terms of the clean, slightly impressionist-cartoon styling but also the overall quality, with the visuals in this free game being on par with the larger paid games.

Likewise, the game’s soundtrack features the same style of dulcet and often melancholy indie tracks as earlier titles, allowing extended cutscenes in which the player can pause for a moment and just listen. Overall the music is implemented in such a way as to emphasise the emotion of the overarching narrative and increase empathy for the protagonist. However, the songs are largely licenced tracks so the game does include an option not to play them so as to avoid issues if streaming the game or playing publicly.

The Awesome Adventures of Captain Spirit is a high-quality game that will provide a few hours of emotional fun for no cost. The game has a heartfelt, emotional and, most importantly, engaging narrative with gameplay that works in tandem to keep the player invested in Chris’ character and the impact their choices have on his story. The juxtaposition of Chris’ young perspective and the often dark or adult subject matter also add to the impactfulness of the experience.

Overall, it’s an obvious choice for fans of previous games set in the same universe (Life is Strange and Before the Storm) but also a game I’d highly recommend to all point-and-click enthusiasts and anyone that appreciates a good story.

For more reviews of narrative-based games, such as Brukel or Brothers: A Tale of Two Sons, click here!