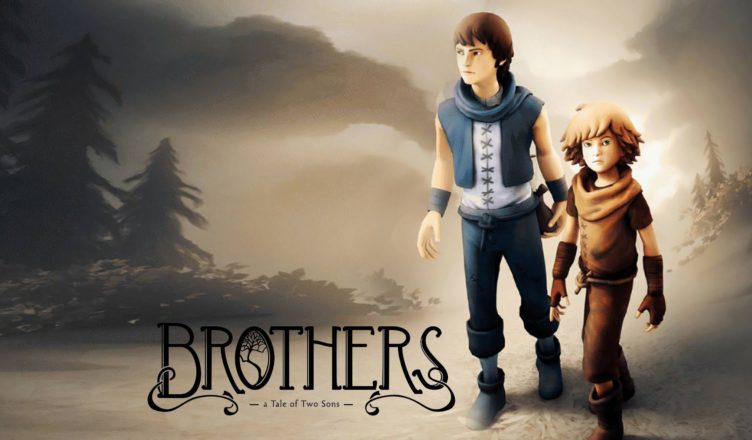 “Being his real brother I could feel I live in his shadows, but I never have and I do not now. I live in his glow.” – Michael Morpurgo

Brothers: A Tale of Two Sons is a unique and emotional experience from Swedish film director, Josef Fares and developer Starbreeze Studios in which you must guide two brothers on an epic, fairy tale journey. It has a soft but detailed art style and a lovely minimal soundtrack that really adds an extra layer of sentiment to the game as a whole.

The game is a co-op single player (yes you read that right) narrative adventure in which you simultaneously control two brothers using the joysticks and triggers. It’s a clever, unique and well-executed mechanic but it does take a bit of getting used to (I was reminded of being a child and trying to rub my tummy and pat my head at the same time). However, it soon feels natural and overall the game’s controls were simple and intuitive despite their unusual nature.

Each brother has abilities the other does not; for example, the older brother is stronger and can swim whilst the younger can navigate small spaces, they also interact differently with people and objects. They are distinct characters with their own personalities and this is clearly portrayed despite the lack of comprehensible dialogue, which is made up of well-acted, Sims-esque gibberish.

It quickly becomes clear that the two brothers must find the tree of life in order to save their dying father and Brother: A Tale of Two Sons utilises some fantastic narrative techniques, along with the beautiful visuals and fitting score to tell a really emotive story (seriously, it gave me ALL the feels).

There are some really simple, but touching moments dotted throughout the game, with the bond the brothers share being instrumental to both the story and the gameplay itself. I almost wish I could say more but I don’t want to spoil anyone’s experience; I will divulge, however, that you get to ride up a mountain on a goat!

Brothers: A Tale of Two Sons is a short game, taking around 2-4 hours depending on your playstyle, but they are a meaningful and thoroughly enjoyable few hours with wide appeal. It is available on a range of platforms, including various consoles, PC, and mobile devices. However, I believe the mechanics and unique style of storytelling and gameplay would be robbed of their charm and poignancy if played on a mobile device. It is for this very reason that you are unable to play with a keyboard and mouse on PC, a controller is required. I would happily recommend the game but with the caveat that, despite the vast price difference, it will be most enjoyable when played with a PC or console and controller.

One thought on “Brothers: A Tale of Two Sons – Unique and Emotional”