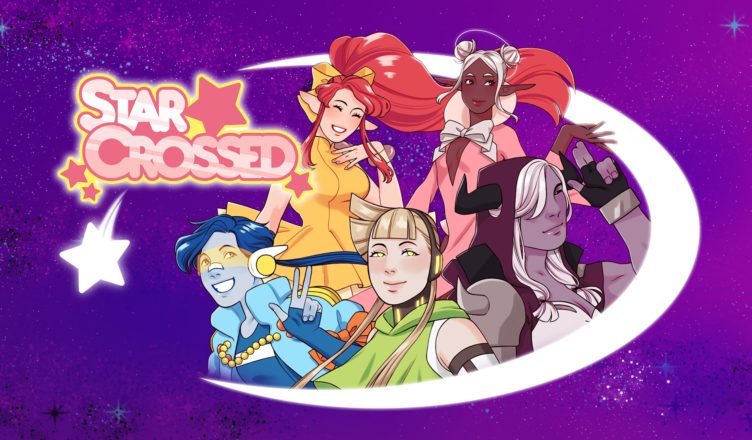 “A girl should be two things: who and what she wants.” – Coco Chanel

Starcrossed is a co-operative arcade adventure set in space. The shoot-em-up style gameplay features five playable female characters with unique styles, personalities and abilities. They must collaborate and fight their way across the solar system to defeat the evil threat that looms over the Nova Galaxy!

Stylistically the game takes inspiration from the ‘magical girl’ sub-genre of Japanese fiction, in particular, titles such as Sailor Moon, Cardcaptor Sakura, and Tokyo Mew Mew. The aesthetics of the characters and their powers as well as the cosmic space setting are awash with cute, pastel colours and plenty of sparkle! The twee and jolly music also has a glittery feel to it somehow and for the most part, really fits with the rest of the game though there were higher octane moments of combat that needed a more dramatic audio edge.

Starcrossed has some really vibrant artwork which is one of the highlights of the game. Each character has a fun and distinct look, however, the same cannot be said for their personalities. The characterisation is one-dimensional and personality traits are only represented on a surface level and fail to come across as genuine. This is further exacerbated by the very flat dialogue that demonstrated little variation between the different personalities. Additionally, the already simple storyline is delivered via excessively verbose interruptions to gameplay and overall the narrative feels somewhat underdeveloped.

The game’s co-operative gameplay can be enjoyed locally, or as a single-player experience playing both characters with a single controller. Each of the two characters fly around freely and manoeuvre a star that bounces automatically between them. The star is the team’s sole weapon and causes damage to enemies on collision. However, the speed and size of the star can be increased with well-timed button presses which will activate starboost which will in turn charge an ultimate move that is different for each of the game’s characters.

Starcrossed is set in the Nova Galaxy where in past times of crisis the Harmony Crystal has anointed five heroes to defend it from evil and keep the galaxy unified. Story mode follows the path of five new champions: The Idol, The Weapon, The Outlaw, The Hero and The Princess on their quest for victory and friendship. Unfortunately, the player is forced to chose a character for the entire story, quite early on in the game and without the opportunity to explore their abilities at all.

Alternatively, arcade Mode is simply a race for points against increasing populated waves of enemies. This provides a more fast-paced game experience but without the sense of progress awarded by the main game. Both game modes offer arcade-style shoot-em-up and bullet hell elements with a range of enemies and varying levels of boss fights.

The gameplay is by far Starcrossed’s strongest feature, the mechanics require timing and teamwork and defeating tougher enemies can be both fun and rewarding albeit pretty repetitive. A few minor bugbears included a small part of the playable screen in each bottom corner being covered by the UI and the lack of deterrent for button bashing, which worked disappointingly well at times.

Overall, Starcrossed is an enjoyable little game, it works well as a couch co-op but also provides a challenging singleplayer experience. The styling is very cutesy and probably not to everyone’s tastes and the narrative and characterisation leave a lot to be desired. However, I’d certainly recommend the game to anyone that enjoys space-themed arcade shooters and likes the idea of a magical girl aesthetic.

If you enjoyed this review and would like to read about other games with LGBTQ+ characters why not check out Curtain or missed messages?