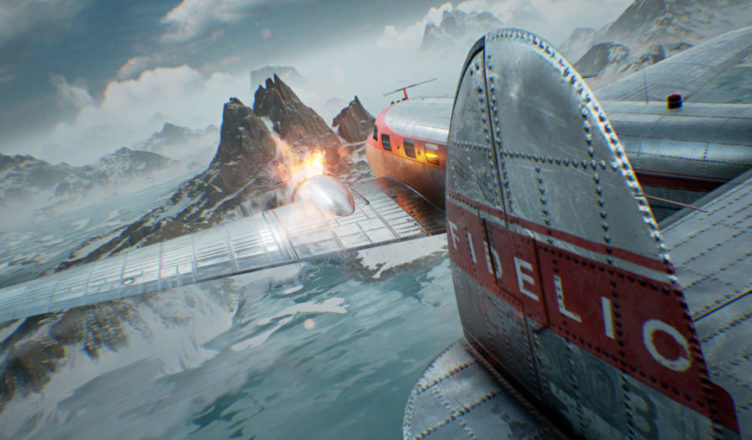 “People do not change, they are merely revealed.”Anne Enwright, The Gathering

The Fidelio Incident is a single-player, walking-simulator and thriller set off the coast of Iceland and inspired by Beethoven’s only opera Fidelio. I recently played it (twice in fact, but more on that later!) and spent 3.3hrs ‘completing’ the game. I managed 13/14 achievements, the last one involving finding and collecting 30 items that are scattered throughout the game, unfortunately, this has to be done in a single playthrough – hence my second run. Even so, I only managed to find 29/30 collectables and while I managed to not throw the controller across the room I won’t be going for a third attempt any time soon!

The story begins in 2010 with a couple in a plane, flying over Iceland, the year is 2010. Almost immediately the plane crashes and the pair is separated. You, as the protagonist Stanley, must now try to find your partner Leonore.  It quickly becomes apparent that the two share a secret past life in 80’s and 90’s Ireland, that cannot be discovered. Everything they need to keep hidden is detailed in a diary kept by Leonore, the pages of which are now strewn across the island – this is where the collectables come in if you hadn’t sussed that out!

The Fidelio Incident slowly reveals the story of the two main characters primarily through the diary entries and exploration of their pasts. However, it does incorporate some puzzle and survival elements in the form of having to stay warm in the first half of the game and reconfiguring steam vents, either for warmth, deterring bugs or putting out fires. These felt novel at first and I initially thought it was a nice touch to add, however they lacked variety and quickly became a chore, I was reminded of the disappointment I felt upon realising the repetitive nature of Outlast’s ‘scare’ and puzzle moments.

I found myself thinking of another game whilst playing this, one of my favourites in fact- Dear Esther by The Chinese Room. Rather than feeling inspired by a game I love though it did at times feel like it was trying too hard to be like it. One moment in particular, relatively early on in the game I was walking into a cave; aesthetically I was reminded of Dear Esther instantly and it’s at this point that Stanley starts spewing a melodramatic, pseudo-existential “were the last 30 years even real” monologue that feels so out of place and forced, I’m sad to say I couldn’t help but cringe. There were moments of climbing, up mountain tops, stairs or similar, that had narration and superfluous tension added, this felt like a failed attempt to replicate the poignant portrayal of ascension within Dear Esther.

Overall I did enjoy The Fidelio Incident, it was visually very stunning, utilising the heat and cold to create a variety of environments and bring them to life. The music was also well constructed and suited to the game, consisting mainly of piano that often felt melancholy but built to a level of drama as the game did.

It’s a short game and will probably give you no more than a few hours enjoyment with little replayability (as I discovered) – If you’re going to go for the collectables achievement, I’d suggest using a guide because just a single missed item will require another full playthrough – too harsh! It’s worth playing but probably only at a discount and if you haven’t played Dear Esther yet, well just get that instead!