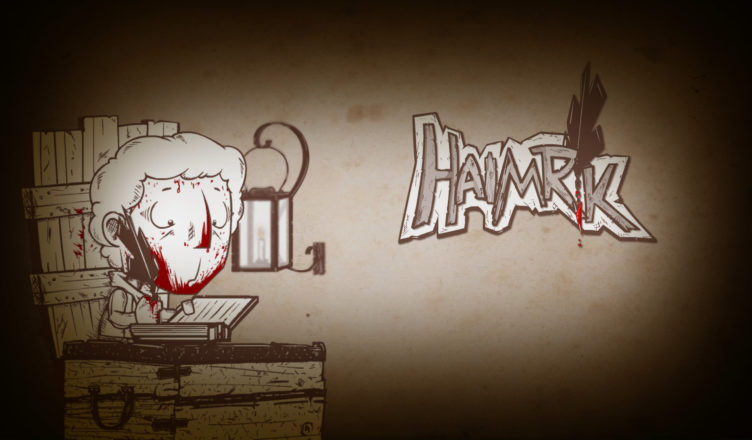 “I’m a charming coward; I fight with words.” – Carl Reiner

Note: This game has a PEGI 16 rating and this review may reflect that.

Haimrik is an action-adventure game with a difference, requiring the player to defeat their foes with words! Set in a sepia-stained medieval world, Haimrik, a young scribe ventures through an environment rife with warriors, dragons and other foes before eventually taking on an evil king and his elite generals, the Word Warriors! The game is an interesting mix of narrative with innovative combat and puzzles, boasting dark humour and a unique art-style.

The game is made up of various word-based combat situations, interspersed with more narrative-focused RPG type sections. The former provides a unique mechanic and is definitely the main draw of the game. The player must use the words on the screen to defeat their foes, often requiring them to be used in the right order or in combination with one another; this serves to add a puzzle component to the gameplay. The same is true of various boss fights and tougher scenarios which often require all of the above to be done with precise timing and preparation, quite a tricky feat that adds a real element of challenge.

The narrative and supposed comedic side of the game were somewhat lack-lustre, enjoyable to begin with but mainly felt like filler and detracted from the superior parts of the game. They do however provide a brief reprieve from what can sometimes be very hectic and intense combat, though it is worth noting that death is rarely punishing and usually just results in having to restart that specific section.

Haimrik’s aesthetics are another highlight, with a distinctive, sepia cartoon style with splashes of red to represent the increasing amount of gore throughout the game. It provides a fun overall visual, familiar with a twist. The drawing style is not overly unique in itself but the way that it is implemented in the game, especially in terms of colour, works really well with the gameplay to create an individual and quirky experience.

Haimrik has a lot to offer and some real uniqueness at its base level. However, this is marred by the inferiority of the other elements which seem like a poor attempt to justify the slightly too high price tag. The word-based gameplay is refreshing and entertaining, the styling is original but the narrative is cliché and the RPG sections become chore-like very quickly.

Overall, I’d recommend it for fans of action-adventure games looking for something different in terms of mechanics but would still suggest waiting until it’s on sale due to both the quantity and mixed quality of the gameplay.

If you enjoyed this you might also like to check out some of our other adventure game reviews!