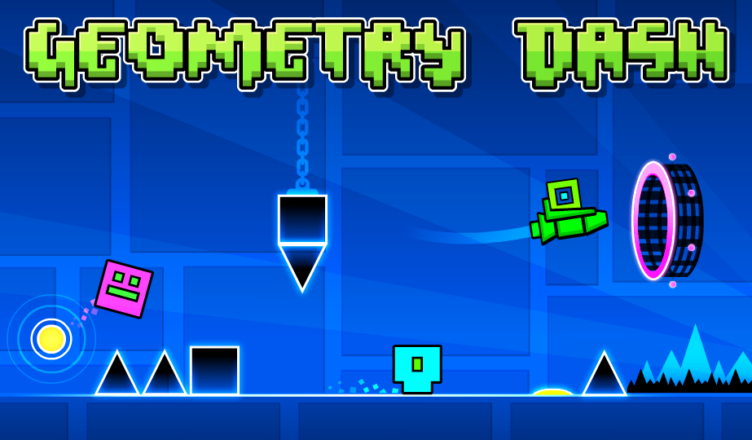 Geometry Dash is a rhythm-based runner game by RobTop in which you play as a cube avoiding spikes and crashing into walls. In addition to featuring music from Newgrounds artists such as Waterflame and F-777, the game also features a level editor and easy access to many custom levels.

The main game consists of 21 levels as of Update 2.111, all with various difficulties, the hardest of which being the Demon difficulty. In all levels, you jump over spikes and other obstacles so you can continue dashing until the end. Each level is associated with a music track, with its gameplay elements mostly synced with the rhythm. Each level typically lasts about a minute and a half long. The game can be wholly played by tapping or holding the screen using only one finger without any virtual buttons obscuring the action.

Besides jumping, you’ll also find gimmicks such as orbs that can be used to get extra height, gates that switch gravity, or even gates that transform you into other forms such as the flight-based ship or the gravity changing ball. In nearly all cases, you will be on guard, as a single mistake will send you back to the beginning of the level, and most of the levels employ a degree of challenge. To alleviate this – especially on Demon or generally hard levels – the game gives you a practice mode which allows you to place checkpoints manually or automatically, allowing you to repeat a specific part of the level for as many times as you wish for practice.

Even within the official levels, you’ll find a lot of variety in level styles. The early levels focus on making the most out of the game’s mechanics and gimmicks. Then there are the middle ones which test your skill and use deceptive techniques such as fake walls. Finally, the last ones focus on showing off their decorations and then new features such as portals or the robot form. Beyond the official levels, the game’s level editor has spawned uncountable amounts of levels that you can play of any variety, and you can create your own levels and share them to the world for playing, with the game’s official music or with most music available on Newgrounds.

Music and graphics, but mainly music

The music is the main draw of the game. The official music tracks are composed by several people including dj-Nate, F-777 and Waterflame, among others, with genres like dubstep, trance and house. With the ability to use nearly any Newgrounds music in custom levels, you could jump to the beat of literally any genre. As such, Geometry Dash is a good way of finding music tracks if you don’t mind the lack of filtering options for the songs themselves.

Graphically speaking, depending on the level, the game can either be plain and simple with nothing to write home about, or excessively beautiful. Some levels have so much distracting decor that it’s hard to tell what is the actual part of the level and what is the decor, which I am not a fan of.

If you don’t mind endlessly failing until you make it to the end, I can guarantee you would sink in hours into Geometry Dash, if not for the endless amount of levels available because of the editor, then because of the bonus of listening to the music while you play. Just remember to practice!

Looking for other premium mobile games? Check out our review of Pocket City, the mobile city builder with no microtransactions or ads!