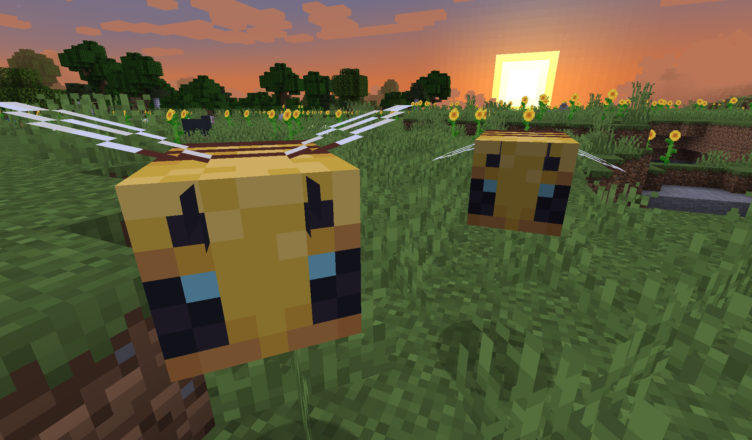 Minecraft Java Edition 1.15, known as the Buzzy Bees update, is not a chunky heavyweight like Update Aquatic or Pillage and Village, but a small, laid back update with a great focus on bug fixing. Let’s take a quick look at what you can expect from the buzzy update, which you can download today!

Upon spawning into a 1.15 snapshot world and getting sufficient iron for armor and tools, I embarked on a search for a bee nest. After a day and a half of walking and a close encounter with a pillager outpost, I found a tree with a bee nest amid the plains. Whether you’re close to one such tree depends mostly on your world’s seed, but for previously generated worlds you might have to walk for long distances!

Make sure you put a campfire below the bee nest or hive and leave room for three blocks between them so to prevent the bees from being hurt. Without the campfire, the bees will be angry if you attempt harvesting their honey and will sting and poison you. If that isn’t enough, they will die 50 to 60 seconds later.

If you use an empty bottle on a nest or hive, you will get honey bottles. You can drink them to restore hunger and cure you of poison status effects, and they can be stacked up to 16. I wouldn’t recommend it as a replacement for the more saturating steak though. Put four honey bottles in the crafting interface and you can get honey blocks, an obscenely sticky block that is useful for Redstone contraptions such as flying machines.

If you use a shear on a nest or hive, you will get honeycombs, which can be crafted into the decorative honeycomb block or used to craft beehives to house more bees (all nests and hives house up to three bees). You can also automate the production of either item by using a dispenser with shears or empty bottles.

Bees will only produce honey if they pollinate flowers! So, make sure there are many of them around the hive or nest. You can also breed more bees by using flowers on them. Whatever you do, don’t make the bees angry and keep good care of them.

Besides bees, several areas of the wide-open sandbox have received quality of life updates, some of which bring Java Edition closer to its Bedrock Edition counterpart, with examples including baby animals spawning naturally in the wild, or the doInsomnia game rule used to stop phantoms from spawning if you don’t sleep.

Under accessibility settings, you can now switch sneaking and/or sprinting to activate only when their buttons are held or toggled on and off. The ability to toggle sneaking and not worry about always holding Shift gives me peace of mind when building over huge chasms, in the Nether, or in the End.

It was very hard to tell if an iron golem was hurt in previous updates, but that changes with Buzzy Bees, as you can now estimate how damaged a golem is by looking at the cracks in its body. You can even repair golems by feeding them iron ingots, with each bar healing 25% of their health.

Chances are if you were annoyed by a bug, it has been fixed in Buzzy Bees. The fix I was most happy about targeted the bug where horses and boats kept disappearing on some dismounts.

Other fixes include hand animations that played when attempting an unproductive action were patched out (here’s one example), while successful actions that did not play hand animations now do so (example). When playing multiplayer, block-breaking animations invoked by other players are now shown. Pillagers no longer spawn inside trees like they do in 1.14.4. You can no longer use Silk Touch books to mine blocks without destroying or changing them, like with a regular Silk Touch enchanted tool.

While not as big as its two predecessors (or its successor, The Nether Update), the bees do a good job of adding more life to the world when you find them, the quality of life features are welcome changes to the game and especially more so the bug fixes. You can check out the full changelog for this update here, courtesy of the Minecraft Wiki.

Interested in recently updated games other than Minecraft? You can read about our coverage of Stardew Valley’s 1.4 update here!