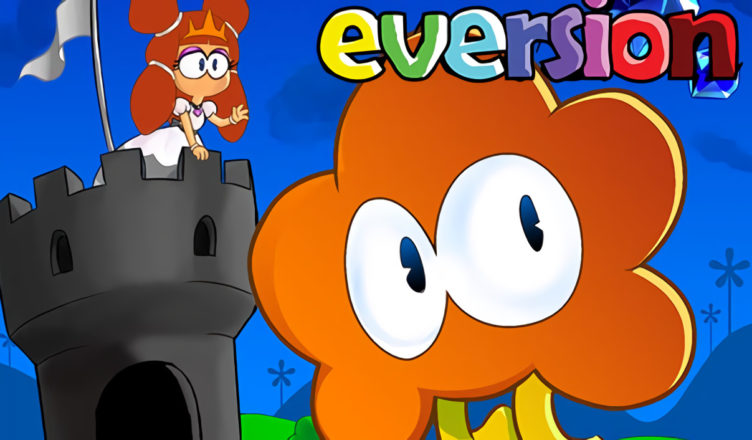 “Sounds – possibly musical – heard in the night from other worlds or realms of being.” -H.P. Lovecraft

This article contains spoilers for the game, and the game is not intended for children or those of a nervous disposition.

Eversion is a game by Zaratustra Studios, which was inspired by an H.P. Lovecraft quote. In the game, you guide the protagonist Zee Tee across the eight levels of the game to rescue the Princess of the Flower Kingdom from the Ghulibas. The game plays a lot like platformer classic Super Mario Brothers, but equipped with a twist: Zee Tee can “evert” the world around him at eversion points scattered throughout the levels, hinted at by mysterious sounds that play only near them (in keeping with Lovecraft’s quote). Eversion allows Zee Tee to change the reality around him, and the more Zee Tee everts, the less happy the world is and the more twisted and darker it becomes.

The eversion mechanic is what sets the game apart from other platformers, as it completely changes how you move through the levels. Clouds can change from background scenery to solid platforms depending on the eversion level, which can then lead you up to previously inaccessible areas. In later eversions, flowers become spiky and will kill Zee Tee on contact, blocking off existing areas or forcing you to carefully navigate around them. Brick blocks cannot be broken in early eversions but can be broken later and will crumble when walking over them in the final eversions, plus they won’t respawn if you return to early eversions. All of these make a level more complex than it appears.

The way in which the game deteriorates in the first few eversions is subtle and brilliant in hiding the game’s worse eversions from unsuspecting players, which makes the shock unanticipated (even with the Lovecraft quote and nervous disposition warning cueing you in). This kind of approach to its horror theme is not something that I often see, with the most recent example of a game with a similar approach that I can recall being Doki Doki Literature Club back in 2017, and I do wish to see more games taking on the Eversion school of thought.  In addition, even the manual implies there’s more to this game than meets the eyes, and it’s yet another detail I love about Eversion.

Aside from its concept, the way the game changes its world and how you interact with it from eversion to another, as well as the eversions themselves and how they turn from cute, happy go lucky to horrific and eldritch, is what really sells the gameplay for me, as it adds several different layers to what is essentially the same levels. The game is short, even if you go for all 240 gems, and you could reasonably see everything it has to offer in an hour or two

The HD version of the game not only includes improved graphics, but also the ability to load custom levels in time attack mode, and if you use the Steam version, a bunch of achievements and an online leaderboard. The freeware version can be modded to use custom levels in place of official ones, but sadly Zaratustra’s website has been taken down since 2018 (fortunately you can still access it from the Wayback Machine). To make custom levels, you must download a tool to make them, which was unfortunately also available from a defunct website (I have re-uploaded it here, along with the custom level mod for the freeware version).

Eversion is a game that starts out cute and slowly, slowly slides down into deterioration until it becomes a completely different game. The amazing execution of the eversions themselves, the unsuspecting nature of the game as well as the level shifting gameplay, are all reasons I highly recommend Eversion, and you can either get it for free or get it with a couple of bells and whistles for $5.

Looking for another platformer with horror elements? Then read my review of Castlevania for the NES!