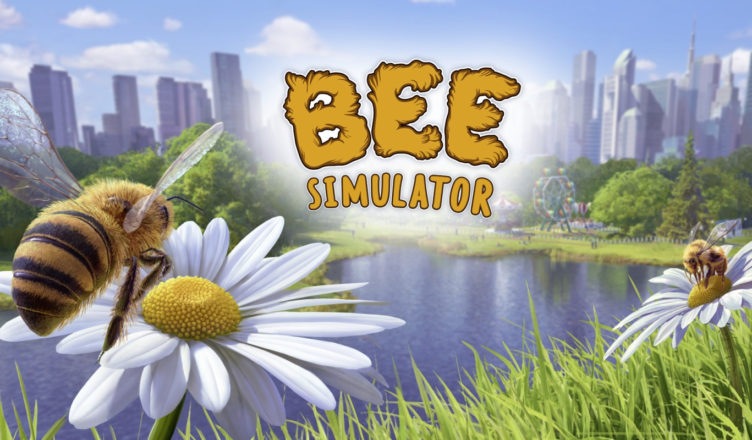 “The lovely flowers embarrass me, they make me regret I am not a bee.” – Emily Dickinson

The upcoming game Bee Simulator is exactly what it sounds like, a casual simulation and adventure game in which the player begins by taking on the role of a Western honey bee (Apis Mellifera). The game is very family-friendly (PEGI 7) and includes a single-player story mode, local multiplayer options as well as open-world, sandbox elements each with their own range of activities.

Bee Simulator starts with a short, informative introduction about bees, their importance and the threats they face and continues to be educational throughout, especially in the single-player story mode. This begins in a new hive and after a short tutorial covering basic mechanics, the player proceeds to the queen to be assigned the job of pollen collection which is an ongoing task.

Pollen sources are ranked from common to legendary with associated colour coding that can be seen by activating bee vision which is helpful because the higher-ranked flowers are more lucrative but also because certain tasks require only a certain type to be collected.

The overarching story centres around the hive as an entirety and the main quests largely involve preparing for winter in order to save the bee’s new family. Whilst completing different tasks, the player is able to learn something about various new species of animals or plants that they encounter through a scrapbook style glossary as well as in-game informational tidbits

As well as completing main quests, there are a number of challenges dotted throughout the environment and indicated with a colour-coded marker. These include racing, combat, collection and dancing mini-games. Additionally, players can engage in a certain amount of open-world activity, such as exploration and popping kids’ balloons!

The combat in single-player mode presents itself in the main quests but also as avoidable marked challenges within the world. Some amount fo combat is necessary but it is not a focal point within the game. The combat is only very mildly violent and involves fighting other hornets for territory and other similar scenarios.

Bee Simulator has only two difficulty settings, easy and hard, this can be changed at any point, even during combat. The difference between the two is colossal and most noticeable during combat. On easy mode, fighting an angry hornet involves rounds of rhythm-based mouse clicking (RMB to defend, LMB to attack) whereas hard mode introduces more action-based combat in which the player must implement well-timed directional dodges and attacks, maintaining stamina throughout multiple opponents.

Easy mode does not pose any sort of challenge for an adult, with combat far too simple to be entertaining or rewarding, yet hard mode encounters felt out of place in a casual simulator, they were often frustrating, resulted in multiple losses (there is no death in the game) and required many reattempts. The stark contrast places the player in a dilemma and the game suffers from its lack of a ‘normal’ mode

Each time the player returns pollen to the hive, wins a fight, completes a quest, challenge, or even some hidden open-world objective, knowledge points are rewarded. These can be used to unlock a vast array of things such as 3D view of creatures in the glossary, different species of bees to play and cosmetic items like hats and trail effects. Whilst this increases the overall content and potential playtime, the activities remain the same, even if the context changes slightly, meaning that collecting all the available items could become a tiresome grind relatively quickly.

Bee Simulator also boasts local multiplayer options with both co-operative and competitive gameplay similar to single-player challenges across a small selection of maps. Whilst this is a fun concept and would almost certainly be enjoyable there were a number of issues (on PC at least) that made this impossible to establish.

Using a combination of either two controllers or player one with a keyboard and player two using a controller, the second player’s input kept affecting the actions of player one as well. For example, if player two looked around, so would player one, and if player two elevated that would activate bee vision for player one! Obviously, this made co-op play difficult, to say the least, and wrote off any possibility of fair competition and overall, was a real disappointment.

Bee Simulator is mainly set in a location inspired by Central Park in New York which provides a nice visual contrast between the immediate natural surroundings and the larger city and buildings beyond. This is emphasized by the juxtaposition of the small scale at which the player is exploring things and the size of the wider environment.

The game’s aesthetics are one of its highlights, it has a realistic art-style and uses light in fun ways to make environments more vibrant. This styling also carries over into other elements of the game’s visuals, such as the glossary which takes on the appearance of a scrapbook, complete with taped in flower pressings and illustrations.

In contrast to the main game, the UI is much more simplistic, it has a colourful and cartoon-like feel that stands out nicely against the game world. The UI does, however, have just enough of a hint of the game’s main style to tie it together and stop it feeling out of place, this can be seen in things like icon borders and the butterfly design of the main compass. Loading screens and a selection of cutscenes also provide some variation and feature more impressionistic art pieces which are often also educational.

The music for Bee Simulator was composed by Mikołaj Stroiński, who has also worked on well-known titles such as The Witcher 3 and The Vanishing of Ethan Carter. The music is whimsical, light-hearted and perfectly matches the tone of the game and its busy bee protagonist. One good example of this is the track Bee Bee Dance, which manages to be simultaneously fun and playful, whilst also slightly frantic.

The sound effects were also implemented well, they were atmospheric and representative of the surroundings and any other signs of life that might be around, such as animals, people or the weather.

Overall, Bee Simulator is a bit of a mix. At it’s best it is both beautiful and educational, but at it’s worst, it barely functions. Based on my own experience, I can’t possibly recommend the game to anyone wanting to play multiplayer. The single-player content is a lot of fun but it is also limited and potentially repetitive, and the difficulty scaling is also less than ideal.

This game does have a lot to offer, especially for a younger audience and while the price tag is rather steep I’d certainly recommend it to parents looking for something to play with their children. It mixes some traditional gameplay modes, such as the racing challenges, with education about nature and bees in particular. For example, did you know that the honey bee’s wings flap at around 200 beats per second, accounting for their famous buzz? I do now!

If you enjoyed this review why not check out our other insect-related game reviews such as Birdgut or Don’t Make Love!