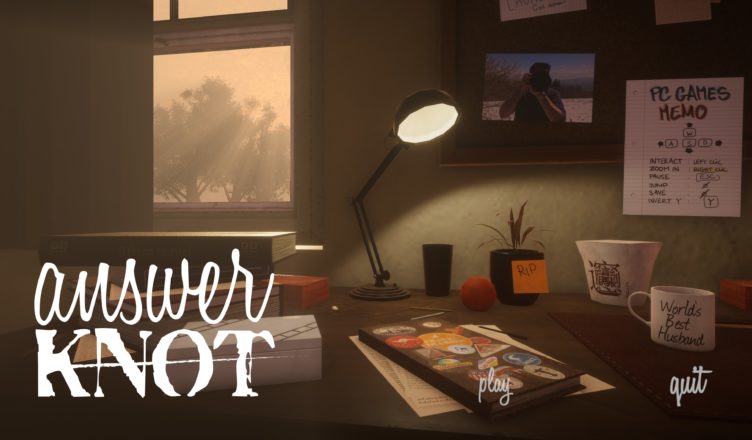 “People used what they call a telephone because they hated being close together and they were scared of being alone.” Chuck Palahniuk

This review is based on an early-access copy of the game which is potentially subject to changes.

Answer Knot is a short, first-person walking-simulator from Naraven Games. You play as Zach, who is stuck at home awaiting answering machine messages from his wife June. Tension builds throughout the day and with each new message as it becomes increasingly clear that something strange is going on!

With the exception of some excessive lighting effects, the art-style was pleasant enough. It felt familiar and didn’t offer anything new; however, the individual objects had a good amount of detail and really helped to give a sense of who the characters are and their relationship to one another. The music in Answer Knot starts out fairly mellow and almost fades to background noise but becomes increasingly dramatic as the narrative progresses. This in addition to the natural and convincing feel of June’s voice acting made the sound a stand-out part of the game that really added to the overall atmosphere.

The gameplay itself is satisfying, there are tasks and puzzles that need to be carried out in order to progress the chain of events. For the most part, these could be solved by listening closely to the messages and applying just a touch of logic. In particular, the puzzle involving the safe is especially satisfying! The environment also has a good amount of items that convey information about the narrative and characters. In general, this was used subtly and is a great excuse to explore the house, however, some elements, such as the protagonist’s anxiety were spelt out a bit too clearly which felt patronising.

Whilst the game has a strong narrative and utilises a variety of story-telling techniques, it is in need of some polishing technically. One such example is the complete lack of in-game options. On launch, it is possible to set the game’s resolution, choose a basic graphics setting from I just want to play, I like pretty lightings or Chuck Norris settings, which I assume equate to low, medium and high! Overall, the game has minimal options, there is no way to adjust volume, graphics or gameplay settings from within the game, meaning that the over-sensitive movement controls and headache-inducing motion blur in the video below are unfortunately unavoidable!

There are a number of other things that could use some refinement. I found a few spelling mistakes throughout the game, elements of the environments are poorly aligned (often clipping into walls), including stairs that simply lead right into the ceiling, not to mention the use of the placeholder-text lorem ipsum that can be seen dotted throughout. These oddities are often not subtle and can really break the sense of immersion, a shame considering the neatly woven and interesting narrative.

A nice little touch that I noticed in Answer Knot were references to other games, such as leaflets for places in Campo Santo (the studio that developed Firewatch), a photo labelled ‘Arcadia Bay’, the location setting for Life is Strange, a leaflet for Whiterun Stables (Skyrim) and a selection of photos of ‘friend’s places’ including Marie’s Room and What Never Was. There is even a nod to the game’s engine in the form of a newspaper headline. I spotted a few other references but I’m sure I missed some, please leave a comment if you spot any!

Overall, Answer Knot is a mixed bag. The narrative design and story-telling are implemented very well, giving the player a real sense of the escalating situation; it fosters intrigue and culminates in an ending that provides an element of surprise. However, there are a number of technical flaws and issues that detract from the experience. Answer Knot is free though and can be played in around 30-40 minutes, so if you like walking-sims, appreciate a good bit of interactive storytelling and can handle the motion blur I’d still recommend giving it a try.