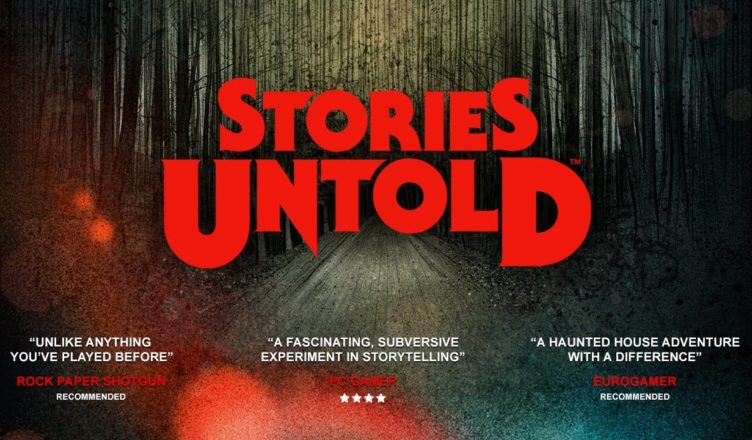 “A story must be told or there’ll be no story, yet it is the untold stories that are most moving.” J.R.R. Tolkien

Stories Untold is Epic Games’ new fortnightly (Fortnitely?) freebie – it will be available on the Epic store free of charge from 16th – 30th May 2019.

The game comprises four separate episodes, each utilising a mix of tried and tested mechanics in a refreshing and unique way. Seamlessly blending point and click and text adventure game styles (among others) to build a really clever narrative.

Each stand-alone episode/story is presented individually, separately named and they all have distinct variations in location (bedroom, lab, weather station and hospital) and play style. However, they are increasingly self-referential and this culminates in a climactic ending that is well worth the 2-3 hours it will take to complete the game, including 13 achievements on Steam.

The game starts at a desk with an old computer and a cassette-loading text adventure game that you proceed to play. Later, it has you using some seriously old-school equipment to complete puzzles. This all adds to the nostalgia whilst always progressing the story, nothing feels unnecessary. The puzzles are well constructed and logical but some of the controls weren’t immediately obvious. I spent a lot of time squinting at something illegible before realising I could zoom! I also found the text input required a bit too much specificity at times, but I always worked it out in the end.

The visuals reminded me instantly of Stranger Things, in that it manages to create a retro 80’s aesthetic that doesn’t feel overdone or contrived in any way. The environments are small but use clever lighting to add depth to the locations and are littered with items definitive of the era, all adding greatly to the sense of nostalgia.

Music was minimal but apt, accompanying sound effects that were used to help create some genuinely creepy moments. The dialogue was written well and convincingly acted, though this was only one storytelling technique used.

No Code did a fantastic job of making Untold Stories a truly unique experience, I haven’t played anything else quite like it. What makes it really brilliant is the way it utilises every aspect of the game to tell the story and add to the narrative. No pixel, mechanic or moment is wasted and I admired how cleverly everything was amalgamated.

After two playthroughs I can tell you that there is pretty much no replay value but the first sitting is definitely an experience worth having!

I’d highly recommend Stories Untold, even at full price. However, we also reviewed ‘Four Free on Steam‘ if you miss the deal and are gaming on a budget!

One thought on “Stories Untold: Free on Epic”