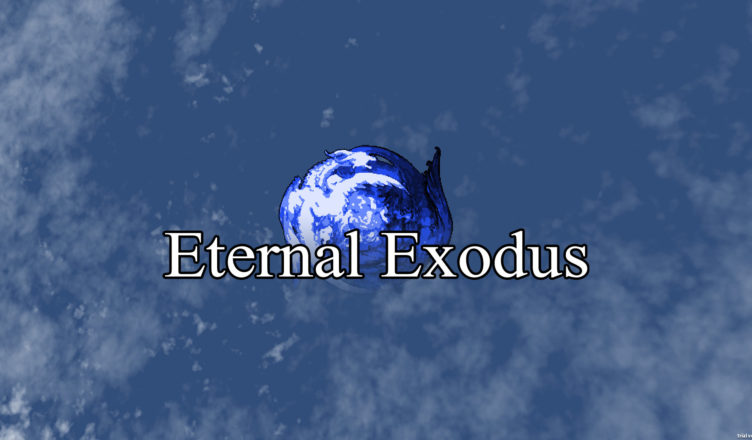 Eternal Exodus is an in-development game by Fordesoft that is currently in its beta phase. Set in Hell, you play as a departed soul who gets promoted from blacksmith to demon summoner, allowing him to catch and summon demons to fight for him. In other words, it’s a mix between Pokémon’s catching of playable monsters and classic Final Fantasy’s JRPG gameplay and Shin Megami Tensei’s fusion of demons.

The beta is certainly rough, but it shows a glimmer of what the game will be like when it’s finished. As such, the intro is loaded with text setting up the world, which I believe would work better if said text was used as banter for the townsfolk.

The game truly shines after you enter the forest and choose your starter demon. You can collect random materials to craft into usable items at your anvil and fuse the demons you caught at fusion altars. Each demon has its strengths in weaknesses, both in offense and defense. Some are physically strong, some resist certain types of magical skills, and some outright absorb certain skills (thus healing themselves).

One of the things I like about Eternal Exodus in terms of its gameplay is the indicator at the top-right of the screen when you enter the only dungeon the beta has on display. As you navigate the dungeon, it changes from green to yellow and finally to red, indicating when the next random encounter takes place. This way, you run into monsters as you do in classic JRPGs with random encounters, but you can predict when and where one would take place.

The music is calm outside of battle, but enter combat and the tone becomes energetic and powerful, which I quite like. Another nice touch is that there are two battle themes for ordinary encounters as opposed to the single battle theme you would expect from JRPGs. That said, one unsavory bug meant that after my first encounter, any music out of battle would not play, except for the music that plays when you meet the area’s final boss. The art is colorful with a slight cyan tint prevailing the landscape. It does well in portraying Hell as not the land of fire and brimstone that everyone expects it to be.

The story is one part of the game that I’m looking forward to. From reading the game’s itch.io page, the dialogue and from some of the developer’s interactions, Hell in Eternal Exodus is overrun with political conflicts. One such example: denizens of Hell are practically immortal through the injection of the “ether” substance, but should departed souls be left to die again to reduce overpopulation, or should they have another shot at life? I enjoy plots where political turmoil is involved, which I believe I will find plenty of in the stable builds of Eternal Exodus.

I’m loving Eternal Exodus at this stage of development, and I think you will reach the same conclusion should you give it a spin. I certainly loved collecting and fusing demons in Hell, and I hope to see more in the future.

If you wish to read more, check out our other pieces on in-development games!