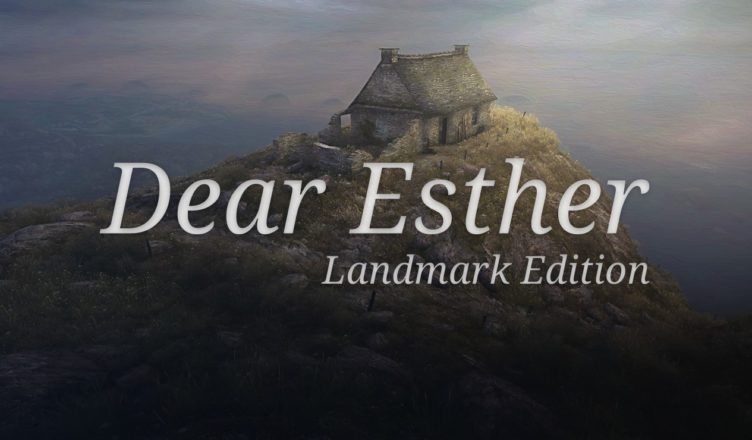 “Fiction can show you a different world. It can take you somewhere you’ve never been. Once you’ve visited other worlds, you can never be entirely content with the world that you grew up in. Discontent is a good thing: discontented people can modify and improve their worlds, leave them better, leave them different.” – Neil Gaiman

Dear Esther is a game changer – literally. It essentially founded and defined the ‘walking simulator‘ genre. In fact, the developers had trouble categorising the game at all, feeling that ‘walking simulator’ was too reductive and initially referring to it as an ‘interactive ghost story’. Nonetheless, the term has caught on and there is now a wide range of walking simulators available across platforms.

The game started as a Half-Life mod, a project led by Dan Pinchbeck which released in 2008. The experience was unexpectedly well received enabling the funding of a full Source remake in 2012, the artwork was completely overhauled by Rob Briscoe and the soundtrack, composed by Jessica Curry, was re-recorded with a live orchestra.

In 2016, The Chinese Room ported the game onto the Unity 5 engine and released Dear Esther: Landmark Edition, allowing it to be played on console. The sound was once again remastered, accessibility and menu options were improved, achievements were added and there is now a greater variety of subtitle languages available. In addition, the landmark edition also features a developer’s commentary with Pinchbeck, Briscoe and Curry that discusses the process of making the game, as well as the narrative and setting.

The 2016 release coincided with a live playthrough of Dear Esther at the Barbican including live musicians and narration. The event sold out and its popularity led to a UK tour in 2017/2018 and further shows in Germany and Holland. I personally attended the event in Cardiff and found it to be a unique and mesmerising experience.

As the protagonist you wander a Hebridean island piecing together bits of your past through triggered voice-overs, scenery and items; all of which are randomly generated and non-linear, ensuring every play-through provides a unique experience!

The narration is fairly sparse and is essentially a series of letters to Esther. The inspiration for this actually came from hearing and liking the phrase ‘Dear Esther’ while listening to The Crab Song by Faith No More. The voice acting is perfectly suited to the rest of the game; I found it emotive but calm and with an air of distance reminding you that is in an inner monologue. The story is left intentionally vague and open to interpretation without being unsatisfying or feeling incomplete; it held my interest and I was intrigued throughout.

The game largely features a muted colour palette of blues and greys, meaning that the radio tower with its blinking red light is immediately recognisable as the target destination. Visually the game is stunning (I took SO many screenshots!) and there are distinct tonal shifts as the narrative progresses, the visuals become more dreamlike and the colour red becomes gradually more prominent towards the end. Similarly, the music highlights the psychological state of the protagonist, becoming more distorted and manipulated as his journey continues.

Jessica Curry’s soundtrack is mesmerising and is one of the highlights of the game (I have been known to fall asleep to both the Dear Esther and Everybody’s Gone to the Rapture OSTs). Notably, the music is not overused or imposing and doesn’t tell the player how to feel every step of the way; the developers desire to allow each player a level of autonomy in interpreting the narrative is evident throughout. Every aspect of the game comes together seamlessly to gradually build the overall atmosphere and reach its crescendo.

You get a real sense of the dedication, work and love that went into this game when you play it and this is even more evident if you then play with the developers’ commentary as I did. It provides some really interesting insight into both the game and the process of producing it and is worth a listen if you’re interested in finding out more about the game, its development or The Chinese Room.

Overall, Dear Esther is a well made, emotive, relaxing, and beautiful experience that challenged the definition of ‘games’ to provide a unique experience. Even though its slow-pace and lack of action may mean that it is not to everyone’s tastes, any walking-simulator fans who have managed to miss it by living under a rock for a while should definitely check it out!

If you enjoyed Dear Esther you might also like to check out some of Indie Hive’s other walking-simulator reviews such as The Fidelio Incident or What Never Was!

One thought on “Dear Esther: The OG Walking-Simulator”