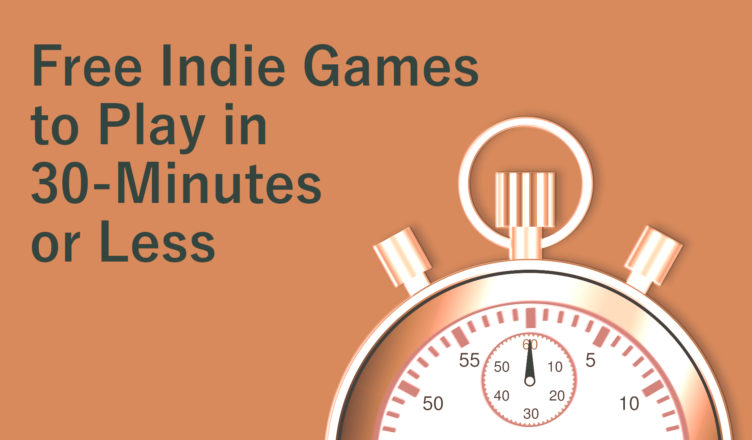 “There is not enough time to do all the nothing we want to do.” – Bill Watterson

Sometimes life can get in the way of satisfying that gaming itch. There isn’t always time to get immersed in a detailed RPG or embark on a lengthy campaign, That’s why we’ve compiled a list of free indie games that can be played in 30 minutes or less!

Dr. Langeskov, The Tiger, and The Terribly Cursed Emerald: A Whirlwind Heist

Directed by William Pugh (The Stanley Parable), Dr. Langeskov, The Tiger, and The Terribly Cursed Emerald: A Whirlwind Heist is unsurprisingly a pretty strange experience. The game is essentially an extended fourth-wall break as the player finds themselves helping behind the scenes of an overbooked game as if backstage at a theatre.

Whilst the protagonist is waiting to play, it is revealed that the game is understaffed due to strikes and the protagonist is asked to help out. An unseen voice, played by comedian Simon Amstell, directs the player in assisting with weather control, lighting, high concept miscellaneous interactions and wildlife preparation! The narration has an enjoyably dry yet silly humour to it, however, the game as a whole is not as funny as it thinks.

The game has a simple and familiar art style but the contrast of dark scenes with vibrant colours and lighting help the industrial theatre setting feel more unique and atmospheric. Due to the near-constant narration, music in the game is minimal but there are snippets of dramatic classical music used well to build tension.

Overall, Dr. Langeskov, The Tiger, and The Terribly Cursed Emerald: A Whirlwind Heist is a unique and enjoyable experience and a great way to casually pass 15-20 minutes for free!

The Monster Inside describes itself as a ‘film noir style, audio-visual novella’ and takes around 20 minutes to complete. The player takes on the role of a detective who has been asked to look into a missing person and murder case.

Stylistically, the game is fairly simplistic, it is entirely black and white, with a basic art style almost like the objects are untextured. This fits the themes of the game, especially when matched with its typical film noir soundtrack of saxophone and piano. Additionally, The Monster Inside featured some really great writing, even managing to complement the overall darkness with some comic undertones. Lines like “my head hit the pillow like it owed someone money” made me laugh without feeling out of place.

The game starts well, with a clear and enjoyable storyline but towards the latter half things get a little weird. The plot twist was certainly unexpected but it was such an out of place development it could be considered obscure and crazy enough to just feel out of place or even breaking the player’s sense of immersion. Overall, The Monster Inside is a mixed quality experience but is definitely worth the very little time and money that it costs!

The Static Speaks My Name

There are so many things that make The Static Speaks My Name more than just a little strange! Everything begins with the player moving towards a floating grey ball (static?). As you approach, a name, age and cause of death are indicated before the protagonist is suddenly transported to find themselves waking in a bedroom. The more obscure elements aren’t too much of a surprise considering that the game pens itself as ‘a dark/sad/weird/funny first-person exploration game . . . [with] “next-gen” features like a shrimp tank’.

A number of mundane tasks such as using the toilet can be completed whilst exploring the rest of the home and unveiling the type of life the protagonist lives. Various aspects of the environment reveal shallow friends, a mysterious houseguest, and an obvious obsession with a picture of palm trees among other things, before leading the player to face the game’s end.

There is a dark theme to the game and the idea of mortality and choice is explored to some extent here. The visuals (and audio) are both fairly basic, but with a strong contrast of colour and grey or muted tones that works really well in adding to the atmosphere.

The Static Speaks My Name will take about 10 minutes to play and is a thought-provoking and enjoyably unsettling experience that I would recommend to anyone wanting a short, slightly depressing game!

Want even more short, free indie games? Why not check out our full reviews for:

Thing in Itself – Philosophical walking simulator.

Resquid – A pacifistic take on the classic shoot-em-up.