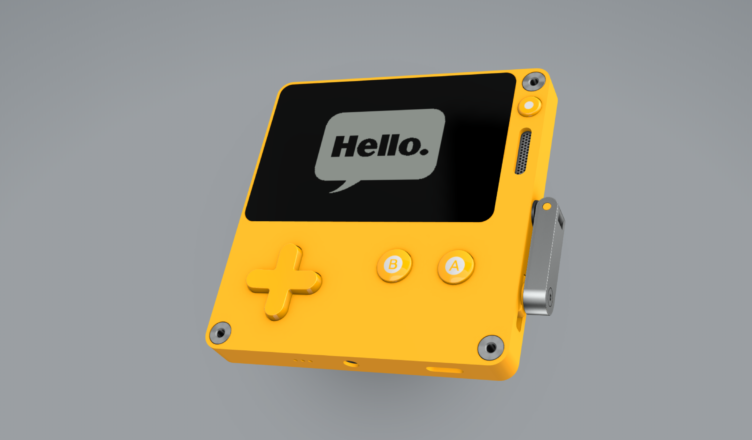 Playdate is a new hand-held video game console released by Panic, a company that is most known to video game enthusiasts for publishing Firewatch in 2016. Previously, the company had focused solely on macOS and iOS applications but have since branched out into new endeavors such as Playdate.

The bright yellow is a beautiful splash of color and pleasing to the eye. The console features a modern, square version of a classic Game Boy that’s extremely thin (74mm × 76mm × 9mm) with a d-pad on the left and A and B action buttons on the right. The Playdate website states the screen is black and white which is surprising given that even the original Game Boy had a monochrome 4-shades palette. This appears to be a rather deliberate move as Panic boasts about the 400×240 resolution of the LCD from Sharp (there is no backlight if you were wondering). A front-facing speaker can be seen to the right of the 2.7 inch display screen along with Wi-Fi, Bluetooth, and a headphone jack. There are no specifics on the OS other than it is custom, and no mention of the CPU, RAM, or storage which could be very telling for play time and battery life. Yet, the biggest difference Playdate features is the addition of an analog crank on the right side. The crank flips out to be used in-game, and some games use the crank exclusively.

Speaking of games, what kind of games will be on the black-and-white only pocket-sized device? Twelve games will come with the initial purchase of the Playdate but not all available at once. A new game will be delivered each week via Wi-Fi. I wonder if local co-op and/or multiplayer will be possible.

About those games. We reached out to some of our favorite people, like @KeitaTakahash, @bfod, @helvetica, @shauninman, and many more.

Here’s a peek at one: Crankin’s Time Travel Adventure, from Keita. It’s fun and funny. pic.twitter.com/0Ibwqr5k3I

There are little to no details about what the games being released are or the target audience, but some of the creators have been announced such as Bennett Foddy, creator of Getting Over It as well as Keita Takahashi known for Katamari Damacy. Other creators such as Zach Cage and Shaun Inman were listed on the site. These games are written in Lua or C, using a Mac-based SDK. Future developers interested in developing a game for Playdate have been asked to reach out to Panic at this e-mail: developer@play.date

I have to wonder how long it will take to beat one of these games as the intention is to release games in seasons hence the name Playdate. This is also why the first twelve will be across three months, one each week, which serves as the first ‘season’ of games. It’s somewhat reminiscent of what Rami Ismail is doing with Meditation Games where a new game is released each day by a different developer. The difference here is I can download Meditation Games onto my phone, not buy a new console.

This modern callback to Game Boy days can be yours for the price of $150 and is slated for release in early 2020. This includes the console and first season of games. Panic has also stated a limited quantity of the console will be shipped. Without the full specifications of the console, it’s hard to say if it’s worth it. I must say, I am extremely impressed that about five people from a company of twenty-five designed and created the board, the OS, a full-featured SDK, a debugger, documentation, testing, and more. I have many questions about Playdate and will have to wait until further information is revealed. Hopefully, the game play is innovative and memorable. Like others, I have signed up to hear more news about the console as I am curious but not holding my breath.