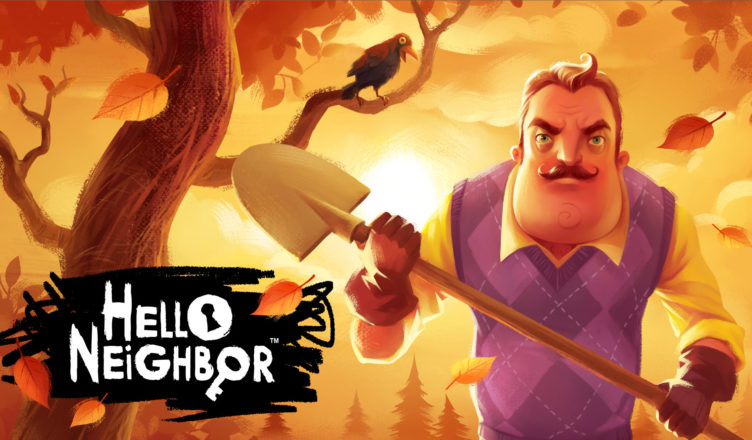 Hello Neighbor is a stealth-horror game by Dynamic Pixels and published by tinyBuild that focuses on breaking into your suspicious neighbor’s house and gaining access to the locked basement and the secrets within. Unlike other stealth games where the enemies move in pre-determined and easily exploitable manners, the Neighbor utilizes artificial intelligence, allowing him to adapt to your playstyle and making him just much harder to get past him undetected!

The main gameplay involves you exploring the Neighbor’s house and solving the puzzles within its walls to unlock the door of the basement, all while avoiding being caught. Hiding from and running away from the Neighbor is straightforward, as you can sneak under beds or inside closets and distract him by breaking windows. You also have ample time to react to him spotting you and running away, as well as stalling him by tossing items at him.

That said, the puzzles are not logical to say the least. Of the game’s three acts, the first act is perhaps the only one that makes any sort of sense, while the next two have utterly unhinged, multi-layered puzzles that themselves include further puzzles, and it isn’t clear what you need to do to complete the act. For example, in act 2, there’s a puzzle to get the valve wheel item, which itself is used in other puzzles. If you can’t wrap your head around large, complex and unintuitive puzzles, you won’t have a lot of fun playing Hello Neighbor without using a guide.

It’s worth noting that depending on how you unlock or lock parts of the house, you can keep the Neighbor out of them, and he will never be able to catch you, even with his ability to adapt to your actions. His AI in the full game is seemingly less sophisticated than in the early alphas, making him much easier to exploit even with his unpredictability. For example, he tends to install loads of motion detectors but rarely boards up the windows, and never places water buckets on top of doors. The Neighbor also has difficulties with detecting you at night, making it a perfect time to break into his house provided you get a flashlight!

Audio, Visuals and Other Tidbits

Hello Neighbor doesn’t rely on music outside of the main menu and a couple of scenarios but makes great use of ambience to give the environment a sense of life (or a tense feeling if you’re in the house) and allowing you to listen more carefully to the Neighbor’s doings.

The visuals are another aspect of the game that gives it strength, with its pleasant cartoony art style that sets it apart from other games, and how well it interacts with the surrounding environment’s lighting. This is complemented further in the flashback scenes, which delves into the Neighbor’s backstory, where small details that add to the narrative can be seen. In addition, the screen blurs and shakes the closer you are to the Neighbor and is accompanied by unsettling music, adding to the feeling of powerlessness.

The Neighbor is also explored further in other media, such as the Steam-only multiplayer game Secret Neighbor, the prequel game Hide and Seek, four books, and even a recently released animated series pilot!

While the puzzles are flawed mixed bags and may require a guide, I can’t say I didn’t enjoy Hello Neighbor, but it would have benefitted from a better execution and environmental hints and clues to the puzzles. I would recommend picking it up at a discount or downloading it from Epic Games if you got it from there back when it was free.

Have a newfound thirst for escapology? Why not check our review of A Way Out? You can also read about Untitled Goose Game, a stealthy, mischievous game!