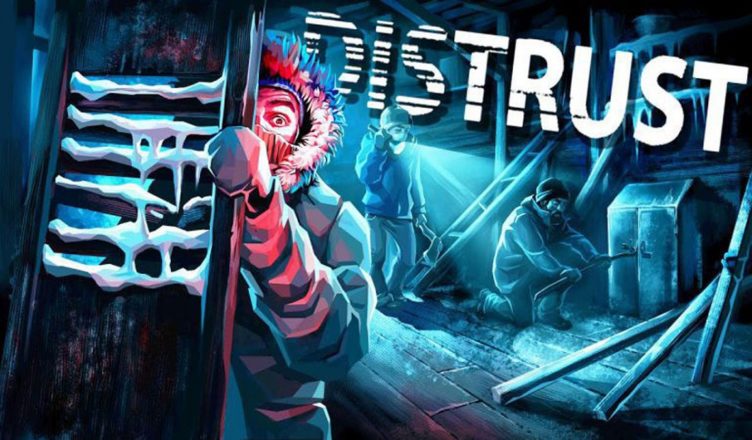 “Reach anybody? We’re a thousand miles from nowhere, man, and it’s going to get a hell of a worse before it gets any better” The Thing (1982)

Distrust is a roguelike, strategy, survival title by CheerDealers, an indie studio based in Siberia, which possibly explains the harsh environment and weather conditions that are integral to the game. It is available from a variety of places, I chose to buy it on Steam where it has 55 achievements, however, these are only obtainable from single-player mode and largely from challenges rather than adventure mode. It’s worth noting that the game is slightly pricier on PlayStation and if you buy it on GOG there is some content missing!

The game is set in an abandoned polar base and you start with a team of 2-3 members, in every mode. They each have warmth, stamina and satiety bars that you need to keep topped up in order to not lose health whilst you traverse 6 procedurally generated zones, each with a puzzle or action that needs to be completed In order to proceed. To make this more difficult, there are also three types of aliens, with different weaknesses, that can spawn each time you sleep making it a risky thing to do and meaning that coffee is a valuable asset (not unlike real life)!

The art style is typically roguelike in its tiled aesthetic but uses a nice colour palette of blues and greys and generally muted tones that really fit the cold, stark setting of the polar base. The music also fits well but is quite bland, even ambient at times and can get repetitive. I actually found the music quite annoying after several hours of play, a real disappointment given the replay value added by the procedurally generated elements, multiple play modes and unlockable characters.

Be prepared for perma-death if surviving alone; however co-op mode allows teammates to drag their comrade to a warm area and revive them from a coma. The single-player mode also adds randomly occurring coin toss type events in which you can improve or worsen the result of the action you are currently taking. In co-op mode, proceeding to the next zone will transport your team with you, in single player, when I tried to this I accidentally abandoned my two friends! Despite the title, this seems to be the only element of ‘trust’ present within the game which claims to be based on John Carpenter’s The Thing. In the film, the alien invaders take on human form, creating that all-important distrust and paranoia, but here, the monsters are small floating creatures that are more irritating than they are scary. The setting of the game, however, is obviously comparable to that of the film.

If you get too cold, tired or hungry there a various debuffs that may be applied, some are genuinely debilitating, such as ‘white noise’ which removes any sound from the game until you are feeling better, or another that limits your ability to see the map or anything off-screen; other debuffs are somewhat sillier and include constant laughing, black and white screen and aggression.

Distrust is certainly interesting and has heaps of replayability. I had fun in both co-op and single-player modes. The random generation of zones and items is really well done meaning there is genuine value in multiple playthroughs. It can be challenging and I have yet to complete the game, only surviving an hour on my first try! I am looking forward to getting more achievements, unlocking extra characters and seeing the different experiences they provide.  This is a well-made game and is excellent value for money even at full price; it has the scope to provide hours of entertainment. I would happily recommend.

Enjoyed this read? You can find more game reviews here!