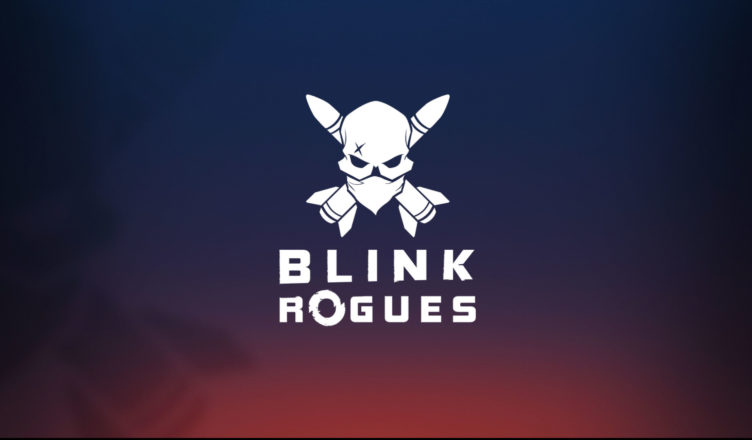 Blink Rogues is an in-development (80% complete) shooter game with a twist by Fox Dive Studios. The game follows the story of a pirate pilot, Lucius Ahalla, as he’s hired by an organization on the pretense that they know his brother’s location. He is then dragged into a plot that involves recovering encrypted cubes containing data important to both the enemies and the organization.

Unlike other shooter games, you always play in split-screen mode, even in single-player, and this is where the twist comes in the form of “blinking,” or switching the side of the screen your ship is on, limited only by a short cooldown. Another selling point for the game is how it isn’t difficult. Deaths are only a minor setback with no lives system to worry about, and even the dodging itself is easy.

Your ship has three special attacks: rockets, spread, and beam, two are color-coded to match the buttons on the Xbox controller while the third is purple. Rockets are powerful and include splash attacks, the spread shots are short ranged but take out a bunch of enemies at once, and the beam pierces through multiplayer enemies at once. Some enemies are protected by colored shields which can be taken down by any of these special attacks. These attacks have limited ammunition but can be restored by pickups, your ship’s health can also be restored by pickups, and given the generosity in which the pickups drop, you can fly around without worry about death or wasting valuable ammo. You can also “flip” and shoot down the screen rather than up.

Besides the game’s available five campaign missions plus the tutorial (ten are planned), there is also a multiplayer mode. You can play against a human player, against a bot (with three AI difficulties to choose from) or watch two bots duke it out. You can also play with another player in the campaign missions. In all cases, both players can switch lanes and wreck the other player in their home lane. Imagine if you could do this in every other split-screen game! The bot enemy was a little dumb, sometimes staying in one place or going off-screen, but when it wasn’t, it gave me a run of my money. With a few tweaks, the bot could be a satisfying challenge to overcome.

The music so far is decent, and fits the action going on, although there were only a few tracks to listen to, which makes me wish there were more. The graphics are simple and effective, but the backgrounds take the spotlight for their details.

The game does show signs that it is in development. For example, when switching lanes, you go to the other lane instantly, and without a clear indication of where you go when you switch lanes, this resulted in the odd situation where I was ramming into an enemy and subsequently losing health. I don’t know if this is intended or if it will be refined, but I wasn’t a fan of it, especially before you can use the EMP upgrade which can freeze enemies once you switch. The main menu itself seems buggy, and I had a situation where I loaded a mission but couldn’t control the ship at all, though I hope this will be fixed.

Blink Rogues is a shooter game to look out for with its lane switching mechanic, and unlike most of its kind, this one is easy to pick up, with death being a minor setback. The multiplayer mode also lets you switch to the player’s side of the screen and wreck them, something I’d like to see in other games too!

Read about other shooter games here!