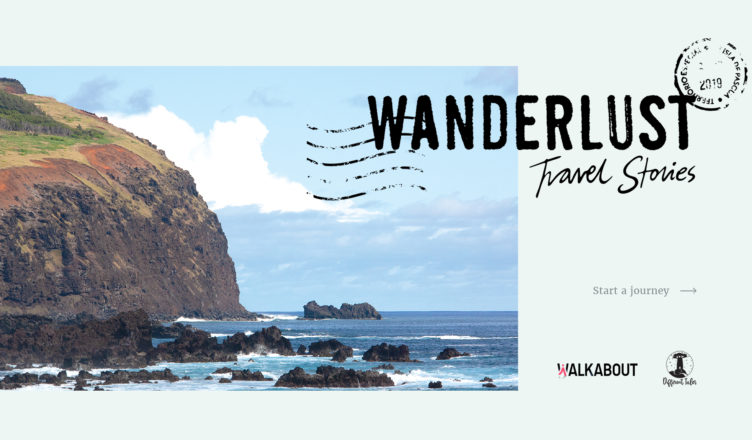 “The wish to travel seems to me characteristically human: the desire to move, to satisfy your curiosity or ease your fears, to change the circumstances of your life, to be a stranger, to make a friend, to experience an exotic landscape, to risk the unknown.” – Paul Theroux

Wanderlust: Travel Stories is an interactive novel and digital travelling experience in which the player adopts the roles of both reader and storyteller, guiding the characters’ actions, experiencing their emotions and creating a journey of their own.

Ex-Witcher developers Artur Ganszyniec and Jacek Brzeziński have swapped swords for stories in Wanderlust: Travel Stories – a narrative based travel adventure that explores the experimental genre of slow gaming. The developers elaborate on this on the game’s website by explaining ‘our goal is not to challenge skills and reflexes, but assumptions and feelings. Slow Games allow you to experience them at your own pace—and grow‘.

The game centres around a group of strangers, who, after a chance meeting in a bar on Easter Island whilst travelling, decide to regale each other with stories and anecdotes of previous adventures. Each character has their own goals, emotions and experiences, which can also be guided and shaped by the player and the choices that they make.

Whilst Wanderlust: Travel Stories is very much a visual novel and heavily text-based (with no voiceovers), the interactions that the player can have, go beyond simply picking from a selection of choices at the end of a paragraph. During various stories, different things are required of the player, for example, when planning the journey, choosing a mode of transport impacts the spending budget and amount of time available to explore. The character also has stress and fatigue metres, in addition to a more general mood indicator, when these stats drop actions and options will potentially become unavailable, conversely, sleeping, eating and relaxing can improve the character’s mood and wellbeing.

The individual tales are of varying lengths, 4 long and 5 short stories letting the player travel from Africa to Antarctica, from Europe to Asia while shaping the journeys of the characters. They are distinct, each with separate personalities, goals and emotions and recite their stories based on the real-life experiences of travellers, journalists, artists and writers. The stories are heartfelt with a focus on connections and self-discovery adding to the game’s relaxed feel whilst still presenting enough possible twists and hiccups to ensure the conclusions remained satisfying.

The controls are basic and the whole game can be played with just a mouse, as such Wanderlust: Travel Stories has a simple user interface displaying choices, character info, destination and contributing factors to the narrative. However, it achieves the simplicity with a clean and minimalist look that manages to retain a degree of softness which allows it to blend more seamlessly into the rest of the game and feel very natural.

The game is filled with beautiful photography from all around the world, accompanied by emotive and well-written travel stories that are awash with information about the places the characters are visiting. The music is also reflective of the region being visited and is generally quite relaxing but did get a bit repetitive during some of the longer sections. The scenes also contain ambient sounds and noises such as ocean waves, food cooking, people talking or traffic which really helps to recreate the destinations and transport the player.

Overall, Wanderlust: Travel Stories is a very pleasant, calming experience, one that feels as though it should be played in the same way one might curl up with a good book. Both the stories and broader narrative are interesting and it is a strong interactive novel, however, there are additional gameplay elements and mechanics integrated with just enough subtlety. For example, making choices relating to fatigue and stress didn’t feel like resource management, despite becoming aware that the levels of each would impact the availability of various choices and actions. Destination, travel methods, interactions and even choice of clothes can affect both character and story but this didn’t feel intrusive or hectic in any way and all the elements combine organically to create a somewhat meditative piece of interactive escapism.

I really enjoyed playing this title and found it a refreshing and relaxing change of pace that I’d happily recommend to anyone unfazed by experimental games or lots (and lots) of reading. It is almost certainly intentionally ‘slow’ enough that it won’t appeal to everyone but it will potentially appeal to people who wouldn’t necessarily consider themselves ‘gamers’. However, the developers are very upfront about what it is and shouldn’t be a surprise to anyone purchasing the game, but for anyone still unsure, there is a free, playable web teaser available to try before purchasing the game!

If you enjoyed this article, you may also be interested in our review of the relaxing walking simulator, Dear Esther or Along the Edge, an interactive novel covered in our 10 Good Games for Bad PCs article!