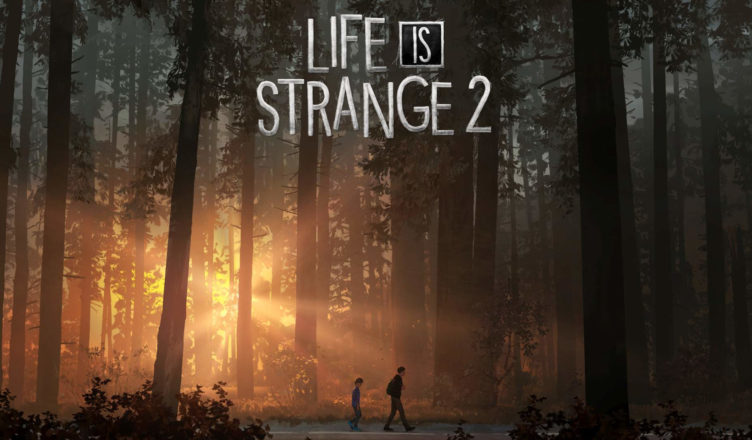 “We have flown the air like birds and swum the sea like fishes, but have yet to learn the simple act of walking the earth like brothers.” – Martin Luther King Jr.

Note: Life is Strange 2 has a PEGI 18 rating and this review may reflect that.

The award-winning Life is Strange franchise is a series of third-person, point-and-click, choose your own adventure games. It began with the original Life is Strange game followed by a prequel Before the Storm and a much shorter free game, The Awesome Adventures of Captain Spirit which some have branded a ‘side-quel‘. All are set in the same universe and have varying levels of connection to each other but are also similar in terms of their beautiful styling and dramatic narratives, the latest addition, Life is Strange 2, is no exception.

After a sudden tragedy, brothers Sean and Daniel Diaz run away from their family home in an effort to flee to Mexico. On the run and fearing the police, Sean must grow up fast to keep them both safe whilst also planning for the future and dealing with his little brother’s newly discovered telekinetic abilities!

Life is Strange 2 is divided into five episodes, each with their own mini-dramas and cliffhangers. The gameplay itself is akin to that of a walking simulator, with some point and click elements. One of the main selling points of the original game was a time changing mechanic that seemed to breath new life into the walking sim genre. Whilst the prequel lived up to its predecessor in terms of narrative and style, it felt lacking by comparison. This new story brings back all the original’s charm and appeals with the inclusion of Daniels’ telekinesis, controlled in the game by using Sean as a proxy.

The game has a heavy narrative focus and includes ‘choose your own adventure’ type mechanics and features decisions that can affect one or both brothers as well as side characters and other elements of the story. In fact, even decisions made in both the original Life is Strange and in The Awesome Adventures of Captain Spirit can have an, albeit very minor, impact on the game.

The story has all the drama, suspense (and a little bit of cheese) that one may have come to expect from a Life is Strange game and touches on a range of heavier subject matter, from death, drugs, and sex to family and growing up. The new addition to the franchise manages this with even more poignancy than the earlier games and really packs a punch emotionally at times.

Much like the earlier games, Life is Strange 2 has an outstanding soundtrack with an indie folk-rock feel for the most part. The OST is comprised of licensed tracks by artists such as The Streets, The Gorillaz, Bloc Party and more as well as an original soundtrack by returning composer Jonathan Morali. The music is presented in both a non-diegetic manner but also more organically within the game world, such as on CD players or buskers. It’s worth noting the game has an option to mute all licenced tracks allowing content creators to stream and share the game without infringing copyright.

The visual elements of the game won’t surprise veterans of the franchise. Life is Strange 2 retains the same aesthetics, featuring soft, slightly impressionist art-style and ‘camera techniques’ such as long tracking shots and selective focusing during cutscenes, and atmospheric lighting, helping to make it instantly recognisable as part of the Life is Strange universe. The overall styling of the game, both the soundtrack and the aesthetics work in tandem with the narrative and really serves to add to the emotive nature of the game.

Across the franchise, there have been collectables within each game. In the first game, it was the photographs that Max took, in Before the Storm it was Chloe’s graffiti, and Life is Strange 2 is no different and asks the player to seek drawing spots and collect Sean’s journal drawings.

Life is Strange 2 utilises a combination of gameplay that works perfectly, with each element complementing the others to create a truly enjoyable and moving experience that will keep players itching to start the next episode. The narrative can move a little slowly at times, but this only serves to build a connection to the characters and add to the players overall emotional involvement, making it all the more gripping. This is only emphasised by the beautifully emotive music and artwork.

Overall, the game is easy to recommend, both to existing fans and newcomers alike. Whilst the experience is supplemented by prior knowledge, it is a stand-alone story that does not require previous exposure to the games.

If you enjoyed this why not check out our full review for The Awesome Adventures of Captain Spirit!