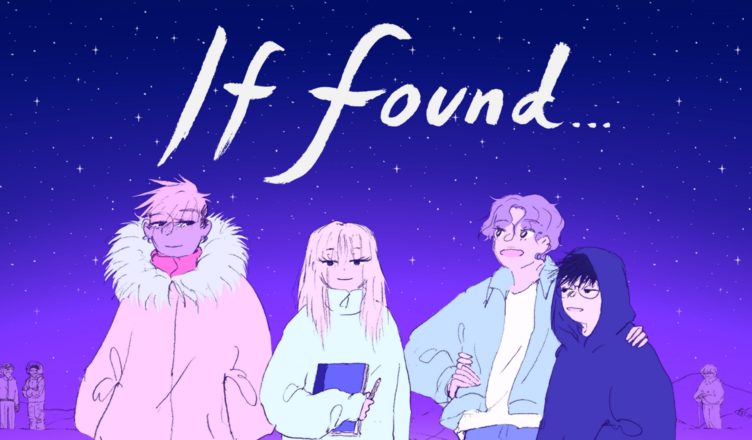 “I am not an angel,” I asserted; “and I will not be one till I die: I will be myself.” – Charlotte Brontë

If Found, an interactive visual novel, is a coming of age story about connection, isolation and self-discovery that centres around Kasio, a young Irish woman, destroying her diary in the remains of a crumbling old mansion. A record of the last 28 days, it tells the story of her return home, her conflict with her family, the friendships she made and the challenges she faced. Somewhere within its pages is also an explanation for the looming black hole that’s about to destroy the Earth!

The gameplay elements consist almost entirely of sweeping the cursor across the screen to erase the diary, revealing something else underneath or progressing to a different part of the page, revealing more of Kasio’s story. As a fun extra, there is also a glossary entry for anything specifically Irish that is mentioned!

If Found is very much a visual novel, it has a fixed ending and does not allow the player to affect the story progression in any way. However, the interaction is implemented in a unique and organic way that helps the player to connect with the narrative rather than being a distraction. The mechanic fits well with the style of the experience and works well for the most part but does start to get a little repetitive over a 2-3 hour playthrough.

Set in the West of Ireland in the 1990s, the game’s main storyline focuses on a young trans woman called Kasio. The story is relayed through pictures, written entries and snapshots of dialogue as the player erases their way through 28 days of family turmoil, new friendships, self-discovery and danger. If Found is an emotional experience, dealing with a range of sensitive subjects; it is rife with both touching and heartbreaking moments, all delivered in an honest and relatable way.

Unfortunately, If Found attempts to blend sci-fi into the story with a second, parallel narrative centred on a black hole. While the space scenes allowed for some beautiful imagery, the connection between the two stories is obscure and somewhat confusing. The inclusion of the sci-fi aspects felt superfluous to the overall experience and detracting from the game’s much better story.

The game’s visuals and soundtrack are among its strongest features. The artwork is beautiful and has a cute, sketchy illustrative style, a little rough maybe, but very charming. The overall aesthetics also have a slightly trippy, psychedelic feel that serves to add intensity to the more tumultuous and dramatic parts of the narrative. These elements make use of much more vibrant and high contrast colour palettes than the muted and pastel shades that make up the bulk of the game.

The music in If Found is diverse, including funky sci-fi beats, relaxing ethereal tones, melancholy notes and even some rockier numbers. The various types of music work coherently together, complimenting the different aspects of the narrative and blending seamlessly with the visuals. Additionally, the game makes nice use of ambient noise such as rainfall and footsteps to improve the player’s sense of immersion.

If Found is a heartfelt and emotive interactive novel but its abstract double narrative is an unnecessary and unwanted distraction from an otherwise sincere and engaging story. While there is some replayability in the form of achievements and missable diary entries this is limited and as such the price tag feels a little steep for the short playtime. That being said, it is an enjoyable, thought-provoking experience with stunning visuals and some great music that I’m happy to recommend to fans of the genre.

If you enjoyed this, why not take a look at Curtain, one of Dreamfeel’s earlier games, or some of their shorter, free titles? Or check out our other visual novel reviews here!